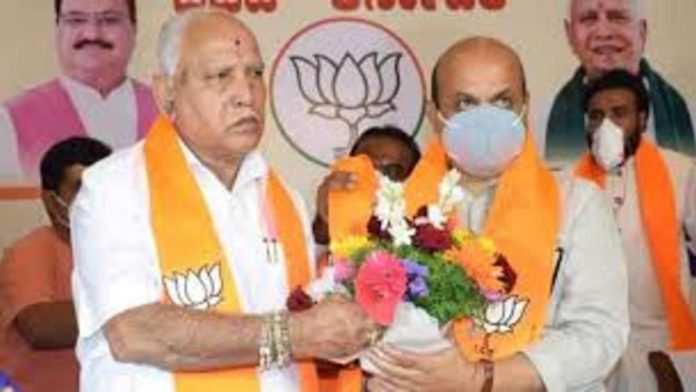 The home minister in BS Yediyurappa’s cabinet Basavaraj Bommai has been appointed as the new chief minister of Karnataka on Tuesday in a meeting of party MLAs. The oath ceremony will be held at 11 am today, said sources.

Basavraj Bommai was among the close aides to Mr Yediyurappa and was also a leader of politically powerful Lingayat.

Basavraj Bommai is the son of Janata Dal’s SR Bommai — a former Chief Minister of Karnataka. Basavraj Bommai joined BJP from Janata Dal United in 2008. While talking to media the 61 year old leader said that he “never expected it” and had faith only in his “hard work”.

Union Ministers like Dharmendra Pradhan and G Kishan Reddy were also there in the party meeting in Bengaluru.

Mr Yediyurappa was the first to congratulate the newly elected chief minister. “Congratulations to Shri BS Bommai on being elected as the new Chief Minister of Karnataka. I am confident you will lead Karnataka in the path of development and fulfill the aspirations of people of the state,” he tweeted.

Handing over the position to another Lingayat leader was seen as must for the party. However, given the community — 16% of the state’s population was not in favour of Yediyurappa’s removal.

Many religious leaders from the community and a few even from the opposition had expressed favour in Yediyurappa’s further tenure.

According to the sources, Mr Yediyurappa had resigned on July 10 and his resignation letter was taken to Delhi by a senior leader close to him and was handed over to the Prime Minister Narendra Modi on the same day.

This suspense remained till last minute and in his farewell speech the 78 year old leader spoke of being tested continuously in the last two years of his tenure. He has served four times as the chief minister of Karnataka.