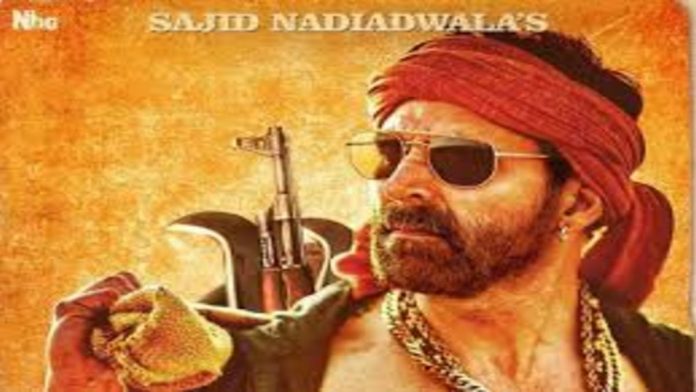 Baghwa welcomes you. Cops are assaulted by gangs in broad daylight, while journalists are burned alive in this lawless region. Bachchhan Paandey (Askhay Kumar) – jiski aankhein aur dil dono patthar ke hain – is the most infamous of all the gundas here. A struggling filmmaker named Myra (Kriti Sanon) is drawn to this hitman’s larger-than-life reputation and travels to Baghwa to produce a full-fledged feature film about him. Vishu (Arshad Warsi), a struggling actor, grudgingly decides to assist her in her hopeless endeavour, and so starts a brutal roller coaster journey filled with murder and devastation.

It’s an intriguing storyline, but we’ve already seen the most of it in the trailer, which very much discloses the whole narrative. ‘Bachchhan Paandey’ does not dependably provide the goods. It’s a large set that seems to be greatly influenced by Tarantino’s style of filming. There are sweeping slo-mo views of the protagonist driving about in his vintage open automobile amid the dry and desert landscapes of North India, as well as an eerily joyful background tune, ensuring that his evil crimes do not instil dread in the spectator. Then, does it elicit a sense of humour? No, since there aren’t many more jokes to begin with, save from a couple (as shown in the teaser). Despite a cast of excellent character painters noted for their comedic timing, this is the case. Sanjay Mishra, who portrays the stuttering Bufferia Chacha, and Pankaj Tripathi, who portrays the dictatorial acting instructor Bhaves Bhoplo from Gujarat, are two examples. When they deliver their punchlines, they provide the laughs, but their personalities are overshadowed by everything else going on in this chaotic jumble. Arshad Warsi has more screen time in this dark comedy, but he never has a chance to shine.

The first half of the film is spent to build up the plot, but it does not proceed at a satisfactory speed. Thankfully, there are some small storey twists and conflicts that keep you interested in the second half, but the script takes an eternity to get to the point. The music is a major disappointment that simply adds to the length of the film.

Akshay Kumar had the most fun as a deranged murderer with a history that isn’t quite plausible. Kriti Sanon looks stunning and does an excellent job in her role. It’s difficult to set this one apart from many of Jacqueline Fernandez’s prior parts since her performance as Paandey’s girlfriend Sophie is so repetitious and limited. Prateik Babbar, who portrays a silly goon again again, doesn’t make an impression. Pendulum and Kaandi, played by Abhimanyu Singh and Saharsh Kumar Shukla, are both entertaining.

There is enough cruelty and bloodshed filmed in crisp shots for action lovers. Given that it’s a remake of a formula picture in the dark action comedy genre, ‘Bachchhan Paandey’ follows in the footsteps of what has previously proven successful in the south. Despite its grandeur and star power, however, this film only manages to amuse in bits and parts.