Nawab Malik Hits At Fadnavis For His Remarks On Underworld Links 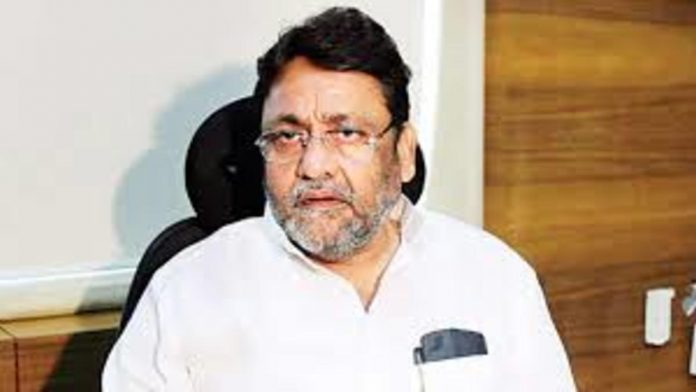 In his recent remarks against state minister and NCP leader Nawab Malik, BJP leader and the former Chief Minister of Maharashtra has alleged that Mr Malik and his family had purchased land from people in connection with the underworld. He made his remarks in a press conference.

Later on, the NCP leader too held a press conference in which he challenged that he will release a “hydrogen bomb” on Wednesday and expose the underworld connections of Fadnavis. Denying the allegations made by the former chief minister he said that he has never bought any land from anyone connected with the underworld or who is accused of bomb blast case.

In his allegations, Mr Fadnavis has said that the Malik family had purchased the lans in suburban Kurla from two persons named Sardar Shah Wali Khan and Saleem Ishaq Patel. He also said that they used fictitious documents and by paid less than the actual land rate.

The BJP leader asserted that the real price for the entire land in Kurla, measuring around 2.80 acres was approximately of the value ₹3 crore. “However, a company controlled by Malik’s family purchased this land for merely ₹20 lakh. The property deal began in 2003 and was completed by 2007,” he said. Malik’s son, Faraz signed the deal which were in the name of Solidus Investment Pvt Ltd, he said further.

“Saleem Ishaq Patel was working as the driver as well as the frontman of Dawood Ibrahim’s sister Haseena Parkar in Mumbai. He was also given the power of attorney of several properties purchased by Parkar. In the suspicious Kurla land deal, Patel had the power of attorney of the land and he signed the sale agreement which was purchased by Faraz Malik, son of Nawab Malik,” said Mr Fadnavis.

Patel was arrested in 2007 with Parkar in a land snatching and fraud case. Khan is carrying out a life sentence punishment for his job in the 1993 bomb impacts engineered by Ibrahim. The sequential impacts, which tore through Mumbai on March 12, 1993, killed 257 individuals and harmed more than 1,400. 99 people were indicted for the impacts under different areas of Terrorist and Disruptive Activities Prevention Act (TADA).

“Why did you do business with the killers of Mumbaikars?” asked Mr Fadnavis.

Mr Malik on the other hand said that the former chief minister was trying malign his image by making “a mountain out of a molehill”. He said that all the land deals and documents were “in accordance with the law.”

The NCP leader clearing the remarks said that he had purchased the plot of land — Goawala compound in Kurla, which was owned by one Munira Plumber who had alloted the power of attorney to Patel. Mr Malik has denied of having any knowledge of Patel’s antecedents. In his clarifications he further added that a portion of the land (300m) was in the name of Sardar Shah Wali Khan, who father was watchman in the compound. Mr Malik said that he had paid Khan to give up his all right over the land.

“Maybe Devendra ji’s informants did not tell him that Sardar Shah Wali Khan still has a house in the Goawala compound. His father worked there as a watchman. He managed to put his name on the property card of the said land. When we purchased the plot, Sardar Shah Wali Khan had a 300-metre plot in his name. We paid him to surrender his right. Your allegations are baseless,” said the NCP leader.

“Devendra Fadnavis is trying to malign my image by connecting me to a blast convict and the underworld. I don’t know Haseena Parkar. Salim Patel had the power of attorney of the family. I did not know Patel was connected to the underworld,” he further said.

“In my years in Mumbai, there have been no allegations that I had any connection or relation with the underworld. You can go to any agency, we are not scared. Devendra ji, you are mistaken to think that you can create a web of lies to malign my image,” the Maharashtra minister also said.

In his another round id questioning Mr Fadnavis’s, “another question arises that why did these two accused persons sell their land to Malik? As per that legal provision, all the properties of convicts get attached and come under government control. Did Malik help them to avoid such land on prime location from getting attached?”.

Another BJP leader  Ashish Shelar demanded the Chief Minister Uddhav Thackeray to take cognisance of the issue and file an FIR to inquire into all the dealings. “We demand that the chief minister must file an FIR against his cabinet colleague and investigate all the deals. The minister has accepted all the allegations we made. The entire wrongdoing by the minister must be exposed,” said Mr Shelar in the press conference.