All You Need To Know About The World Wildlife Day 2021

Now the day has become the most important day for preserving the wildlife. 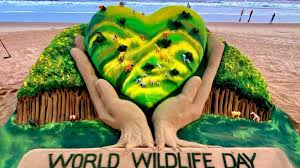 The World Wildlife Day is celebrated on March 3 every year to raise awareness for the world’s flora and fauna.

The day is observed to raise awareness about the wildlife and to teach yourself and others about the world’s diversity, its significance and its perseverance.

In all its for celebrating the beautiful wildlife existing on the planet with us and for us.

The United Nations General Assembly on December 20, 2013 announced 3 March to be the day of UN World Wildlife Day and should be celebrated to enlighten about the importance of plants and animals in our lives.

In its manifestation the United Nations General Assembly emphasized on the importance of wildlife and strongly stated the essentiality of flora and fauna.

The Assembly also said the day will be observed to make the people aware about this dynamic world and how the human activities affect the plants and animals.

In the manifestation the UN General Assembly also appointed the CITES Secretariat as the facilitator for the observance of the World Wildlife Day at a global level.

Now the day has become the most important day for preserving the wildlife and also our lives.

The theme for this year’s World Wildlife Day is “Forests and Livelihoods: Sustaining People and Planet”. This theme works “As a way to highlight the central role of forests, forest species and ecosystem services in sustaining the livelihoods of hundreds of millions of people globally, and particularly of Indigenous and local communities with historic ties to forested and forest-adjacent areas.”