Will Mahua Moitra Face Action Against Her Remarks In Parliament Speech ?

“Judiciary stopped being sacred the day a sitting CJI was accused of sexual harassment,” the Trinamool MP said. 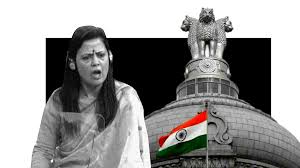 TMC MP Mahua Moitra’s 20 minute speech in Parliament has become the talk of the town. She gave a flaming 20 minute speech on 8 February on motion of Thanks, in which she made remarks on former Chief Justice of India (CJI) Ranjan Gogoi including sexual harassment allegations against him.

However, she did not name the CJI, but look what she said:

“The sacred cow that was the judiciary is no longer sacred. It stopped being sacred the day a sitting chief justice of this country was accused of sexual harassment, presided over his own trial, cleared himself and then proceeded to accept a nomination to the Upper House within three months of retirement, complete with Z-plus security cover.”

After her statement the lower house of the Parliament faced an uproar from the MPs sitting at their treasury benches who forcefully opposed her.

Although she was allowed to complete her speech in which she kept on criticizing the ruling government from farmers’ protests to misusing of various laws.

As per the reports the center had decided not to take any action against her over her remarks.

Many BJP MPs have sought actions against her over her remarks in her speech.

As per the sources after a rethinking into the matter the BJP has now decided to take action in this matter against Mahua Moitra after she shared a video clip of her speech on the next day of her speech in the Parliament.

Those who have filed the requests for action include a former Minister of State for Law and BJP MP, Nishant Dubey.

Following this Mahua Moitra tweeted that she will not be silenced.

She had also tweeted