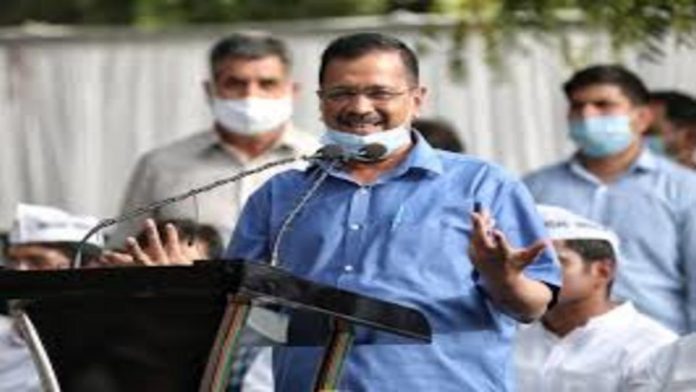 Addressing a Kisan Mahapanchayat at Punjab’s Moga the Delhi Chief Minister and Aam Aadmi Party national convenor Arvind Kejriwal on Sunday said, if in 2022 Punjab Assembly elections AAP is voted to power then it will provide jobs to those youngsters who have registered themselves on ‘Har Ghar Naukri’ scheme introduced by Congress in 2017 ahead of the polls which it never fulfilled.

Speaking in the grain market in Baghapurana of Moga, Kejriwal told that he just came to salute the Punjab farmers who have been protesting at the Delhi borders as they were the ones to raise their voice against the three contentious farm laws and to start their “andolan (movement) which has now become an andolan of each Bharatwasi (countryman)”.

He also said, if AAP gets to form its government in Punjab it will build a ‘Naya Punjab’ inspired by Delhi model “where people are getting free electricity, free treatment in mohalla clinics and excellent education in government schools”.

Flashing a ‘Berozgaar Bhatta card,’ that were distributed by Congress ahead of 2017 elections with promises of one job to each household under its scheme of ‘Har Ghar Naukri’ Kejriwal said, “This card says ‘Captain ne saunh chukka, har ghar ikk naukri pakki’ (Captain has taken a vow, one job in every household is confirmed). So, did you get the jobs? People who got the jobs, can they please raise their hands?” the Delhi CM asked the crowds, adding that at least 20 lakh such cards were distributed by Amarinder before polls in 2017 and now those people stand “cheated”.

He also urged the people of Punjab to “take revenge” for the fake pre-poll promises they got.

“Did you all get the smartphones? Did you all get 2,500 monthly pension? Has all of your debt been waived?” he asked the crowd. “In Delhi, electricity bills of majority of households are zero. They get free treatment and free of cost surgeries in government hospitals and mohalla clinics. Our government schools are world-class. We aim to create a Punjab where no child’s education or any person’s treatment is discontinued due to lack of money. Naye Punjab ka sapna banana hai…” said Delhi CM.

The AAP leader also paid his tributes to the 282 farmers who lost their lives during the protests against the three farm laws. The names of those who died were put up on the stage with a slogan stated as “Kisaana De Naal Kejriwal,’ which means Kejriwal with farmers.

“The Centre allowed farmers to come to Delhi and asked us to pass orders to convert nine huge grounds/stadiums into jails so that farmers from Punjab rot in those jails for months and the agitation fizzles out. But it is Waheguru ki kirpa, that the power to convert those grounds into jails was with our government not the Centre. I refused to sign those orders despite multiple calls and the pressure on me from the Centre,” told Kejriwal.