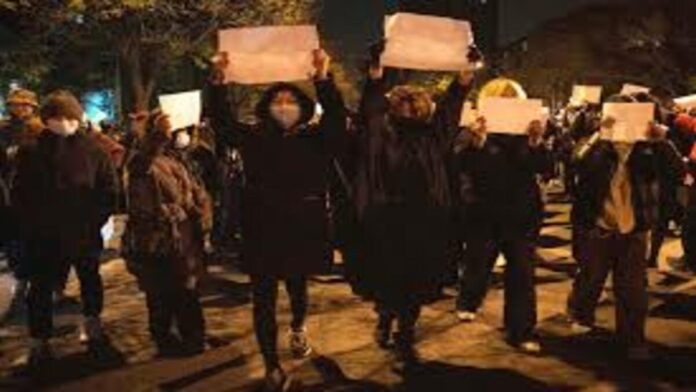 Wide protest broke out in China late on Sunday with slogans against President Xi Jinping and government’s ‘zero-COVID policy’. While, countering the agitation police arrested several journalists and protesters in Shanghai.

People came on streets against the government’s ‘zero-COVID policy’ which puts strict measures and movement restrictions even if single case of Covid-19 is reported in the country.

The protesters complained against the mass testing drives, long quarantines and frequent lockdowns. The country’s major cities where the protests broke out include Wuhan, Beijing, Chengdu and many other areas.

These repeated curbs by the Chinese government has frustrated the public till neck since the first breakout of the pandemic. These protests come just days after fire incident in Urumgi city of China on November 24.

The incident ended up taking lives of 10 people and over 9 were injured.

Earlier on Sunday over 200 students were also gathered around the Beijing’s Tsinghua University against the “zero-COVID” policy.

Meanwhile, in response to the protests the Chinese government has deployed large teams of police forces. Early in the morning on Monday, according to the reports there has been a clash between the police forces and the protesters but no such report of any arrests yet.