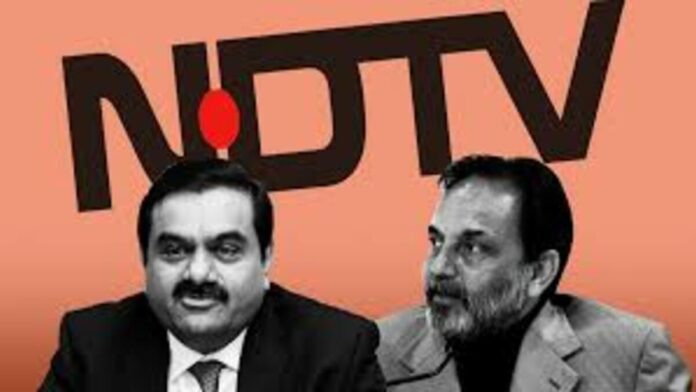 The acquisition by Gautam Adani has made everybody curious as the group has offered to acquire 26% shares NDTV at Rs.294, which was approved by the Securities and Exchange Board of India (SEBI) following the acquisition from Vishvapradhan Commercial Private Ltd (VCCPL) of Mukesh Ambani.

The offer is open between November 22 and December 5. Presently the market price of NDTV shares is Rs.386 and what is strange is that in the initial four days, Adani Group got 6% of NDTV shares at Rs.294 per share.

According to Bombay Stock Exchange (BSE), the market price for the NDTV share is Rs. 386 now. However, the Adani Group still acquired those 6% shares at just Rs.294. Now the question arises, how could anybody sell his shares below the market price?

Why the deal has become so silent, why the mainstream media is silent about this mysterious deal? These are the questions which would have popped up soon after the deal was uploaded at the SEBI’s website on Friday. However, if Prannoy Roy, the supporter of Left-Congress Media would have any issue regarding it then everybody would have barked over the deal.

One thing is certain. Everybody including NDTV founder Prannoy Roy confirmed a deal with Gautam Adani, who seems very close to Prime Minister Narendra Modi, here are the reasons:

The shares were continuously on rise on Friday and finally at 4 pm the price per share stood at Rs.386.80.

Amid the situation, the SEBI the market regulator is under question. SEBI should be often reminded that it addresses the normal shareholders’ interests.

Prannoy Roy and his partners set up a pretense of a dissent when Adani obtained 29% shares in NDTV from the firms linked with Mukesh Ambani. Yet, later we saw numerous in the upper administration of NDTV selling their shares and making a speedy buck.

PGurus had already confirmed a deal between the NDTV and Adani Group. An interview published by Financial Times revealed that Mr Adani had offered the chair to NDTV founder Prannoy Roy.

Amid the ongoing deal, it is predicted that Mr Roy will continue to be on the Board of NDTV after Adani Group gets 56% shares by the mid-December and will accept the offer by Mr Adani to “remain as chair”.

Meanwhile, it is likely that Prannoy Roy will try to escape the case he is currently facing by the Enforcement Directorate (ED) and Central Bureau of Investigation (CBI) along with the massive tax evasion penalties by the Income Tax Department.