Why Military Staged A Coup in Myanmar ?

The military openly asserts that its actions are totally justified, and the announcement cited an article in the constitution that allows the military to take over in times of emergency, though Suu Kyi's party's spokesman and many outsiders have said it's effectively a coup. 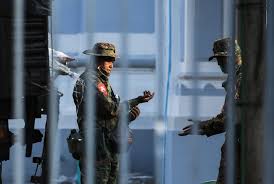 The Myanmar military have staged a coup which has left the military in command under a one year of state emergency. Meanwhile Aung Sab Suu Kyi the country’s de facto leader along with President Win Myint and several other politicians have been detained.

The detainment happened on Monday which was also the day of first session of parliament after the last election in Myanmar that Suu Kyi’s party won. But the military claims that there were huge irregularities on voter lists that led fraud in that vote, though the election commission has called these claims baseless. A Television channel Myawaddy TV called this the failure of government to act upon the allegation however, the channel was owned by the military.

The military openly asserts that its actions are totally justified, and the announcement cited an article in the constitution that allows the military to take over in times of emergency, though Suu Kyi’s party’s spokesman and many outsiders have said it’s effectively a coup. Some experts expressed puzzlement that the military would move to upset the status quo in which the generals continue to hold tremendous power despite progress toward democracy in last couple of years.

Although people noted the sudden retirement of Senior Gen Min Aung Hlaing, who has been commander of the armed forces since 2011 and who was put in charge on Monday. There’s internal military politics around that, which is very opaque, said Kim Jolliffe, a researcher on Myanmar civilian and military relations. This might be reflecting those dynamics and might be somewhat of a coup internally and his way of maintaining power within the military.

Following the state of emergency and the detainments there was a cut in Television signals all across the country, phone and internet access cut in Naypyitaw, the capital, while passenger flights were grounded. Phone service in other parts of the country was also reported down, but people were able to use internet in many parts of the country.

The de facto leader Suu Kyi spent years under house arrest and received the Nobel Peace Prize for her efforts to bring democracy to Myanmar. But her reputation outside of the country soured after she went on the international stage to defend a crackdown on Rohingya Muslims a campaign the US and others have labeled genocide. Former US diplomat Bill Richardson questioned Suu Kyi’s ability to lead given that defense.

“Because of Suu Kyi’s failure to promote democratic values as Myanmar’s de facto leader, she should step aside and let other Myanmar democratic leaders take the reins with international backing and support,” said Richardson.