Finance Minister Nirmala Sitharaman's budget proposals have been lauded by experts, but India's middle class seems to be upset. 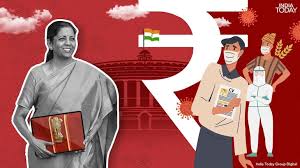 The budget proposed by Finance Minister Nirmala Sitharaman for the next fiscal year has succeeded in providing a long-term growth roadmap, but it has been disappointing for India’s huge middle-class population.

Although the government focused on boosting expenditure in key areas, many feel that direct demand-creation measures were ignored in the budget.

A large section of India’s middle-class feels there is nothing in it for them in the budget.

For starters, the budget did not offer any income tax relief to small taxpayers, which could have been one way to boost demand.

Given the tight revenue situation, taxpayers were expecting at least some incremental benefits. But only compliance issues were dealt with in the budget besides giving tax relief to those above 75 years of age.

However, the pandemic has severely affected the working population of the country, especially people in their 20s to those in their late 50s.

There were hardly any tax measures announced to help India’s working-class population, who were affected badly due to the coronavirus pandemic.

Despite the government’s effort to give the gig economy a boost by boosting infrastructure, falling income levels among the country’s salaried-class citizens could become a concern over a longer period.

Even though the revenue position of the government was tight going into the budget, it must be noted that citizens have also been waiting for a tax exemption relief since 2014.

Another decision that has not gone down well with some Indians, particularly, high net worth individuals (HNIs), is the removal of tax exemption on the interest income from provident fund contribution above Rs 2.5 lakh per year. In the budget, the finance minister said that interest earned on Employees’ Provident Fund (EPF) of Rs 2.5 lakh at the current income tax rates.

Revenue secretary Ajay Bhushan Pandey told The Economic Times that the decision to tax PF interest is based on the principle of equity.

The government said that the move is aimed at taxing high-value depositors in the EPF. It may be noted that at least 12 per cent of an employee’s basic salary is deducted mandatorily for a contribution towards provident fund. The other 12 per cent is contributed by the employer.

Among other reasons that have upset the middle-class population is the rise in customs duty on some products. Reports have already started indicating that prices of some consumer durable items and smartphones will rise.

Customs duty on some auto parts has also been raised to 15 per cent. Citizens feel that this will lead to a further hike in vehicles prices.

There is also a general sense of disappointment regarding the high taxes on petrol and diesel. The government did slash basic excise duty and special additional excise duty on both fuels, but it has introduced a 2.5 per cent cess for agricultural infrastructure development. The end result is that the price remains the same.