The Punjabi actor – Kisan organisations are trying to make a scapegoat.

The actor has been linked with farmers’ agitation for last many months. 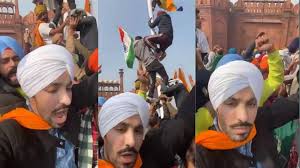 Deep Sidhu, who is a Punjabi actor and singer has entered the limelight for being doubted for all the wrong things. In yesterday violence which took place in various parts of Delhi like ITO, Red Fort on which reactions and condemnations came out from all walks of life. Deep Sidhu is alleged of putting down the National flag at the protest site. Later he reacted on the allegations by asserting that he was present at the protesting site but did not remove the National flag.

He said, “To symbolically register our protest against the new farm legislation, we put up ‘Nishan Sahib’ and a farmer flag and also raised a slogan of Kisan Mazdoor Ekta. The flag represents the country’s unity in diversity, he said while pointing towards the ‘Nishan Sahib’. ‘Nishan Sahib’ is a religious symbol seen in all Gurudwaras.

He also said that nobody removed the National flag from flagpole on the Red Fort and nobody raised any question regarding the unity and integrity of the country.

The actor has been linked with farmers’ agitation for last many months on which he said, “anger flares up” in a mass movement like this when the genuine rights of people are ignored. “In today’s situation, that anger flared up.”

Deep Sidhu was an aide to actor Sunny Deol during the 2019 Lok Sabha election when Sunny Deol contested from Gurdaspur, Punjab. But Deol who is now a BJP MP has distanced himself from Sidhu when he joined farmers’ protests.