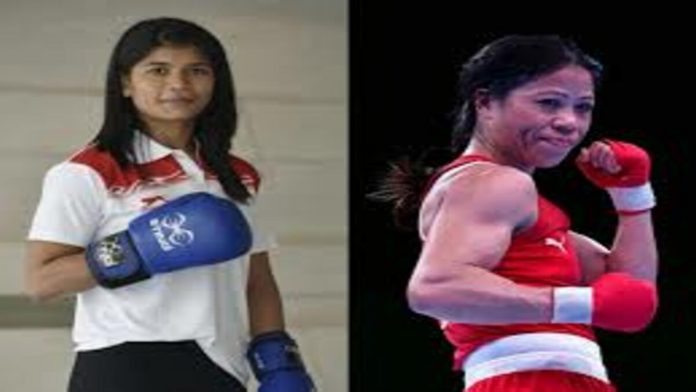 “Who is Nikhat Zareen?” When a teenage Telengana boxer wanted a trial for the Tokyo Olympics, legendary Indian boxer Mary Kom famously asked this question. When Mary was handed an automatic ticket to the 2019 World Championships, Nikhat, who competes in the same weight class, protested it and fought for a trial.

Mary Kom outpunched the Telengana boxer in 2019 to book a spot to the Tokyo Olympics, therefore Nikhat did not win the highly publicised trial.

Nizkhat, on the other hand, did not give up. She has never done so in her life. When she was only 15, the brave boxer from Telengana earned a gold medal in the Youth World Championships. It wasn’t easy competing in the same flyweight division as Mary Kom. Mary, a sporting legend, had dominated the weight class for years, winning as many as eight medals at global events, including six gold medals.

Nikhat had to fight his way out of Mary’s shadows all the time. She had a strong run leading up to the Tokyo Games, capturing gold at the famous Standja Boxing Memorial Tournament and silver at the Asian Championships.

Nikhat, on the other hand, missed the bus to Tokyo. Nikhat responded to all of the questions a year later.

Nikhat Zareen, who is he? She holds the title of world champion.

When Nikhat met the reporters on Thursday, the first question she asked was, “Is my name trending on Twitter?” It certainly did.

With Mary Kom opting out of big tournaments in 2022, including the world championships, Nikhat had a chance to finally walk the walk. She did it in style, too.

Nikhat Zareen became the fifth lady boxer from India to earn a gold medal at the World Championships on Thursday, May 19. More importantly, she is only the second Indian woman boxer to win a world meet gold medal outside of India, following Mary Kom.

Nikhat was at her best in the final, winning 5-0 over Thailand’s Jutamas Jitpong. Nikhat won all four of her fights by unanimous decision, demonstrating her dominance in the weight class in Istanbul.

Nikhat had a great year in 2022. At the Standja Boxing Memorial Tournament, the 25-year-old became the first Indian boxer to win several gold medals, and he carried that form to Istanbul, where he won the global title.

Nikhat Zareen is no stranger to proving critics wrong. She started out in sports by focusing on the 100m and 200m sprints, but a trip to the local sports complex with her father changed everything. Nikhat questioned her father after seeing only boys participating in boxing. Her journey took a different turn after that.

Nikhat was sceptical when folks in her village informed her about the “Boxing Mardo Ka Game.” Instead, she embarked on a mission to dispel myths.

“When I walked to a stadium, I noticed that the Urban Games were taking place. Except for boxing, I saw girls in every sport. Then I became interested as to why there were no female boxers. ‘Papa, sab game mein ladkiyon hai, but boxing mein kyu nahi hai?’ I asked. ‘Kya bas mardo ka game hai?’

“‘No beta, girls can box, but people say girls don’t have the guts to box,’ he said.

“I come from a community where very few parents enable their girls to pursue their sporting ambitions. Those statements challenged me, so I decided to take up boxing.

“‘Papa, mein boxing karoongi,’ I informed him. I wanted to demonstrate to others around me that boxing is a legitimate sport.’ “Nikhat explained.

Nikhat, who has set her sights on Paris 2024, is eternally thankful to her father, Mohammad Jameel Ahmed, for his unwavering support. The greatest gift she can give her adoring ‘father’ is an Olympic medal.

She said, “Every girl needs a father like mine.”

“It was difficult for me and my father at first because people around us were saying all kinds of things. But none of this was heard by my father. He helped me along the way. That is why I have always considered myself fortunate to have such a father.

“One day, I’ll win an Olympic medal and make him proud.”

Nikhat Zareern will suddenly be the centre of attention. The nation’s hopes will be focused on Nikhat now that Mary has taken a back seat. However, the young pugilist, who had been waiting in the wings for a long time, will treasure the attention and use it to fuel her path toward her Paris goals.