Who Is BJP’s Possible Nominee For Presidential Elections Next Month? 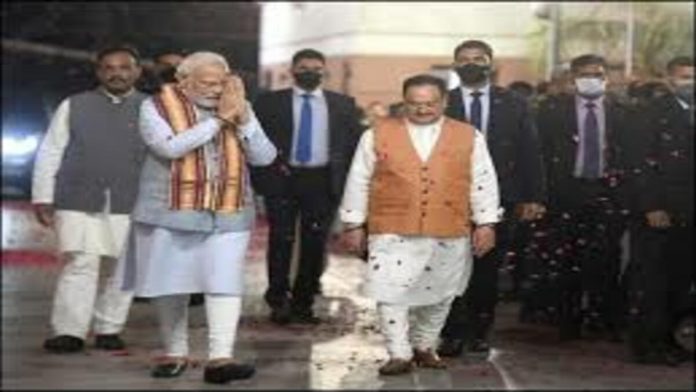 A renowned journalist recently asked on Twitter, “What are the chances that any of those being touted now would become India’s next President?” “Close to nil,” stated one of the respondents, who is also known to have credible insights into the BJP’s operations. And the answer encapsulates what some of us may be missing in the run-up to India’s 16th President’s election on July 18.

Mamata Banerjee, the West Bengal Chief Minister and a TMC leader, convened a gathering of opposition leaders on Wednesday, including members of the Congress, to explore names for an united presidential candidate. It’s unclear how united that candidate will be, given that despite invitations, no one from the AAP (Delhi and Punjab), the TRS (Telangana), the YSRCP (Andhra Pradesh), the SAD (Punjab), or the BJD (Odisha) attended the conference.

The Left was present throughout the discussions, although it is critical of Banerjee’s “unilateral acts.” However, Gopalkrishna Gandhi, the former West Bengal Governor and Mahatma Gandhi’s grandson, and Farooq Abdullah, the former Jammu and Kashmir Chief Minister, have been nominated.

On the other hand, the incumbent BJP-led National Democratic Alliance (NDA), which is almost certain to win the election, which will be announced on July 21, receives little attention. In every conceivable contest, the NDA enjoys an advantage over the adversary. As a result, few people are wondering who will win. The question is, who will be the candidate for the NDA?

Rajnath Singh, the Union Minister, and JP Nadda, the President of the Bharatiya Janata Party (BJP), are in talks with opposition parties to find a consensus candidate. The name may have already been chosen, but we have no idea who it is. Even within the BJP, few do.

However, there are certain unmistakable patterns in previous presidential elections. The NDA’s pick has significant electoral and political clout. Furthermore, it catches the opposition off guard, causing some of its constituents to support the NDA. And this might make the stats, which are currently in the NDA’s favor, seem less meaningful.

The National Democratic Alliance (NDA) ran APJ Abdul Kalam for President of India in 2002. The opposition Congress and regional parties such as the Samajwadi Party (Uttar Pradesh) and the Telugu Desam Party (Andhra Pradesh) were caught off guard by the initiative and ultimately backed India’s “missile man” for the country’s top constitutional post. Banerjee felt the same way.

Kalam was a Tamil Nadu native, and the state’s two major political parties, the AIADMK and the DMK, had no motive to oppose him. The sole exception was the Left, which ran liberation fighter Lakshmi Sahgal, who was defeated in a one-sided election.

More recently, during the 2017 election, the NDA surprised many by electing Ram Nath Kovind, the then-Governor of Bihar and a low-profile Dalit leader. He comfortably won. We’ve seen how the BJP has won over big portions of the Dalit population in elections with this and other similar initiatives.

We’re not sure if this is a factor, but Union minister Mukhtar Abbas Naqvi matches the BJP’s strategy of reaching out to electorally vital communities and leaving the opposition with few options. He is a Muslim who belongs to the Shia sect. His Hindu wife is a devout follower of Hinduism. Shia Muslims have been more lenient toward the BJP. Whatever support the Muslim community had for the NDA government’s anti-triple talaq law came from Shia Muslims.

Naqvi has not been nominated for the Rajya Sabha, and the Lok Sabha elections are not scheduled until 2024. His candidacy cannot be completely ruled out. Another possibility is Kerala Governor Mohammad Arif Khan.

There are plenty other possibilities. Prime Minister Narendra Modi has lauded Tamil culture numerous times, claiming that the Tamil language is older than Sanskrit. Assume a Tamilian from the south is chosen as the presidential candidate. In that case, it will aid the BJP in breaking into virtually uncharted area, making it impossible for even some opposition parties, like as the TRS, to oppose the candidate. The DMK, Tamil Nadu’s ruling party, will find it difficult to remain in the opposition camp. In the recent state elections, the BJP was an ally of Tamil Nadu’s opposition party, the AIADMK.

What happens if the NDA nominates a tribal candidate? Who would successfully oppose the election of India’s first tribal President? Even so-called independents like the BJD and the YSRCP (Andhra Pradesh) will find it easier to support the NDA in the end, as they frequently do.

And what about a West Bengal-based Bengali NDA candidate? Banerjee may be forced to reconsider her decision. This has happened before. Only 48 hours before the election in 2012, she made a U-turn and voted for Pranab Mukherjee, the UPA’s presidential nominee. She had sparked a coalition crisis by suggesting alternative names as the second-largest component. Mukherjee was the first Bengali to be elected President of India. Regardless of their personal differences, it was always difficult for the Chief Minister of West Bengal not to support a Bengali.

Now let us turn our attention to the west. The NCP, which is a member of Maharashtra’s Shiv Sena-led government alliance MVA, which also includes the Congress, is working with Banerjee to form a united opposition front. Even there, however, there could be a twist. The Shiv Sena, which was a member of the NDA at the time, voted against its coalition’s pick in the last three presidential elections. And this opens the possibility for the Sena to support the NDA’s decision even if it is no longer a member of the BJP-led coalition provided the choice is favorable to Maharashtra’s ruling party.

But why is Banerjee exerting so much effort when the NDA’s win in the presidential election appears to be a foregone conclusion? When India goes to the polls in 2024, everything will be clear.

She is aware that the Congress is demoralized by mounting electoral defeats; that its leader Rahul Gandhi is embroiled in the National Herald money-laundering case; that its president Sonia Gandhi is battling illness; that AAP leader Arvind Kejriwal, who has eaten into much of the Congress’s support base, doesn’t want to appear to be an anti-Modi leader in order to win over BJP voters without upsetting them; and that TRS leader K Chandrashekar Ra

Banerjee recognizes that this is her best chance to position herself as an alternative to Modi. The BJP is well aware that her demands will only serve to further eclipse and destroy Congress. The presidential election could simply be another opportunity for the BJP to exploit severe splits in the opposition and, as a result, the lack of a credible alternative.