Who behind the IED blast near Israel embassy in Delhi ?

A letter was recovered from the site which said thatthis blast was just a “trailer”. 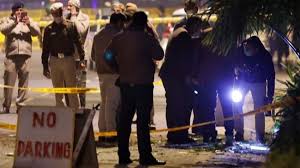 The blast which took place on Fiday outside the Israeli embassy is not been clear but an irnanian hand is suspected in the minor IED blast. A letter was recovered from the site which said thatthis blast was just a “trailer”.

The letter also mentioned Iran’s General Qasem Soleimani and Iran’s top nuclear scientist Mohsen Fakhrizadeh as martyrs. They both were assassinated last year for which many protests were held.

Mohsen Fakhrizadeh, Iran’s top nuclear scientist was assassinated on November 27, 2020. He was killed in Tehran using a satellite-controlled machine-gun. Iran has blamed Israel for the attacks on its top leaders.

However, the blast did not lead to any major damages and not amy injuries only window panes of three cars were broken in the impact of the blast as the blast was of low intensity.

“A very low-intensity improvised device went off at 5.05 pm near 5 APJ Abdul Kalam Road. Initial impressions suggest a mischievous attempt to create a sensation,” said the Delhi Police in a statement.

As per the sources the explosive was kept between the pavement and bushes when it went off.

The blast took place near the Israel embassy which was just a few kilometers away from where the Prime Minister Narendra Modi, Vice President M Venkaiah Naidu and President Ram Nath Kovind were Beating Retreat ceremony The blast took place when President Ram Nath Kovind, Vice President M Venkaiah Naidu and Prime Minister Narendra Modi were present a few kilometres away at the Beating Retreat ceremony at the culmination of The Republic Day.