Which Are The Top 7 Bollywood Movie Releases In 2021 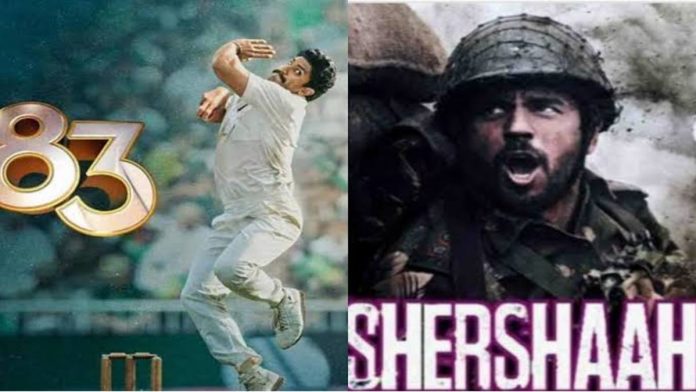 To be honest, the film business had a better year in 2021 than it did last year. Film sets that had been halted began to reopen, as did movie theatres. Many films were given to us this year that left an indelible mark on our hearts. While biopics such as 83 made us cry happy tears, war films such as Shershaah wowed us with their subject, acting, and melodies. Before the year ends, we’ve compiled a list of the best Hindi films of the year thus far.

83
83, directed by Kabir Khan and starring Ranveer Singh, is unquestionably one of the best films of 2021. The movie is based on India’s historic 1983 World Cup victory. The movie has a 7.4 rating on IMDb. If you haven’t seen 83 yet, now is the time!

Sardar Udham
With Sardar Udham, Vicky Kaushal once again demonstrated his acting abilities. The film is based on historical events and follows the courageous journey of Sardar Udham Singh, an Indian freedom fighter. The film, directed by Shoojit Sircar, leaves a lasting impression on the audience. Udham Singh is unquestionably one of the year’s best films.

Shershaah
In Shershaah, Sidharth Malhotra wowed us with his performance and screen presence. Captain Vikram Batra, a Kargil war hero, is the subject of the film. In the film, Kiara Advani portrayed Dimple, Captain Vikram’s fiancée, and she made us fall in love with her all over again. Shershaah is so excellent that it will undoubtedly awaken your inner desh bhakht.

Mimi
With her hard work and talent, Kriti Sanon has built a name for herself in Bollywood. But Kriti in the role of Mimi was wonderful! With Mimi, the actress broke out of her ‘hottie shell’ and proved she was much more than just a performer. Pankaj Tripathi had a significant role in the picture, and we don’t need any more justifications to show how effectively he did. It’s no surprise that the film is at the top of this list and in the hearts of the viewers.

Haseen Dillruba
Haseen Dillruba blew our minds with every scene and every moment! Not only did the tale captivate us, but the ensemble of characters was equally impressive. Taapsee Pannu and Vikrant Massey both showed why they are who they are today. Harshvardhan Rane, who played Neel Tripathi, was a fantastic addition to the cast.

Bell Bottom
The Akshay Kumar-starrer was one of the first few films to reopen in theatres after months of closure, and critics praised it as the movie that “saved India and theatres once again” in their review. It goes without saying that Akshay and Vaani Kapoor were naturals on screen. Bell Bottom is the film to see if you want thrills, excitement, and Akshay Kumar all in one bundle.

Sherni
Vidya Balan can carry a movie on her shoulders by herself, and Sherni is proof of that. The actress starred as a forest officer in this film, which sparked interest as soon as the teaser was released. The movie was well-made, and the character sketches were equally so. Vidya was the star of the show once again.

As a result, we’ll end our selection of the top movies of 2021 on a ‘roaring’ note. Let’s hope that the film business has an even better 2022.