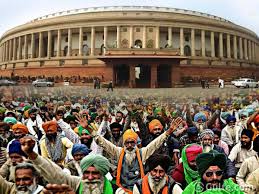 In the ongoing sessions of Parliament on farmers’ protests the opposition leaders are continually targeting the government on its handling of the situation heated up by the farmers. A debate was heated in both the houses of Parliament.

A Congress MP Deepinder Singh Hooda said in the Parliament that farmers are our good as they are the ones who provide us food and make our lives self-sufficient but they are being called “terrorists” for their demonstrations.

Another MP from RJD Manoj Kumar Jha said that the government does not want to listen anything against the farm laws and hence calling everything criticizing the laws as “anti-national”.

But on the other hand MPs from BJP kept defending the laws by asserting the benefits of the three laws. Oil Minister Dharmendra Pradhan said that the three farm laws are for farmers’ welfare and will help them in generating more revenue.

“Agriculture is a state subject but here the Centre has come up with these laws that no one wants. The laws should have been brought after discussion with the farmers. I appeal to the Prime Minister to listen to the farmers in a respectable way, that is the only way to resolve this dispute,” said SAD MP Sardar Sukhdev Singh Dhindsa. Famers are the ones who always sacrifice but now they are the ones who are blamed for fighting for their rights, he added.

Dhindsa further said, “Govt says the farm laws are for the benefit of farmers, but they don’t want these laws. They have been demanding complete rollback of the farm laws, but nothing is happening. On the Republic Day violence, those who were behind the incident are not caught but the farmers are being blamed. These are farmers who have made the maximum sacrifices for the country.”

“So much of security arrangements at Delhi borders against the farmers. You could have made these arrangements at the China border, would have done good for the nation. I appeal to the government to listen to the poor farmers, who are sitting on the roads for months, they are our annadatas. What is this ego? Why don’t you want to roll back the three farm laws? Why hold them for 1 year and not completely repeal them?,” said BSP MP Satish Chandra Mishra.

Shiv Sena MP Sanjay Raut said that for this government anyone from politicians to journalists, who questions or criticizes government becomes anti-national.

After the ongoing long sessions of Parliament of farmers’ protests BJP has issued three line whip to Rajya Sabha MPs from 8-12 to support the government ‘s stand.