What is Mamata’s strategy to get Hindi speaking voters in support amid ‘Bengalis vs outsiders’ theme ?

For the first time in Bengal’s electoral history, the poll narrative has circled around the “Bengalis versus outsiders” theme. Along with the “Hindutva politics” to wean away Mamata’s non-Bengali vote bank, the BJP now is also focussing on Bengali identity politics. 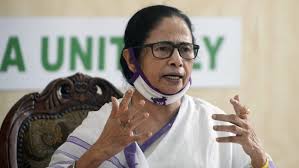 Kolkata has always been a melting pot, a confluence of cultures, on account of once being the capital of British India. Once a thriving business hub, it has attracted a number of trading communities such as Gujaratis and Marwaris, and a strong labour force from Bihar and Uttar Pradesh.

Over the years, these communities have made West Bengal their home. Gradual urbanisation of Kolkata’s suburbs and the emergence of other industrial hubs such as Asansol and Siliguri have also attracted a number of people from other states.

However, this is for the first time in Bengal’s electoral history that the poll narrative has circled around the “Bengalis vs outsiders” theme. An aggressive BJP has the ruling Trinamool Congress unnerved. Chief Minister Mamata Banerjee and her party leaders have termed the BJP “a party of outsiders”, hinting at their support base in the Hindi heartland.

The BJP countered, asking if Bengal is not a part of India, and if Prime Minister Narendra Modi and Home Minister Amit Shah do not belong to this country. Mamata was forced to clarify that the Trinamool is not against non-Bengalis, but some BJP leaders such as Kailash Vijayvargiya are outsiders because they do not understand Bengali culture.

Faced with this rhetoric, the BJP has been forced to change its campaign narrative. Along with its “Hindutva politics” to wean away Mamata’s non-Bengali vote bank, the BJP now is also focussing on Bengali identity politics. But the question for Mamata is can her “Bengalis vs outsiders” poll pitch boomerang?

Bengali identity politics should be seen in the context of “Gujarati asmita”, once pitched by Narendra Modi as CM, and identity politics in some southern states. It can also be compared to the nationalism plank played out at the pan-India level.

Bengal never had a strong party like TDP or AIADMK that had a regional approach. Amra Bangali had a short and uneventful stint in Bengal’s electoral politics and that too in the 1980s. So, it was the Left earlier, and Trinamool now, that represents regional aspirations.

However, given the strong numerical presence of non-Bengali communities in several assembly constituencies, it will be difficult for the Trinamool to bank on the heterogeneous Bengali vote bank alone.

In Kolkata, for example, the non-Bengali population comprising Gujaratis, Marwaris, Biharis, Punjabis and Sindhis together number more than Bengalis. The Barrackpore industrial belt on the northern outskirts of Kolkata comprise heavily of a non-Bengali migrant labour population owing to the jute and cotton mills there.

In the 2019 Lok Sabha elections, Trinamool turncoat Arjun Singh won from Barrackpore Lok Sabha constituency on a BJP ticket. Political analysts say he had the migrant vote for himself. Out of 2 lakh voters in Jagatdal assembly seat under this Lok Sabha constituency, 1.5 lakh are Hindi-speaking. And if top Trinamool sources are to be believed, Mamata is contemplating putting up a non-Bengali candidate here.

In fact, several districts of Bengal have a non-Bengali population of over 10 per cent, and the number is more in certain pockets.

On Thursday, January 28, Mamata is holding a meeting with representatives of the Hindi-speaking communities at the Trinamool headquarters in Kolkata. The meeting, to be attended by some 500 people, has been organised by her Rajya Sabha MP Vivek Gupta, who’s also the founder of Hindi daily ‘Sanmarg’.

When the Left was in power, it never gave permission for Ramlila celebrations in Bengali-dominated areas. This unwritten rule was reversed during the Mamata regime, and the Trinamool will send across this message to the Hindi-speaking community.