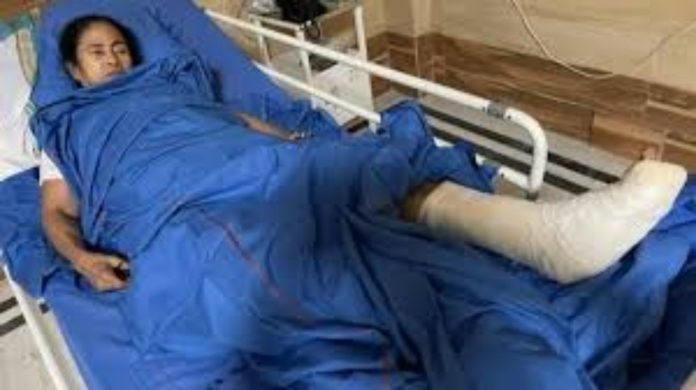 West Bengal Chief Minister on Wednesday suffered injuries after she got pushed from back by unknown miscreants during her campaigning in Nandigram. She was immediately admitted to SSKM hospital after the incident but hours after she was admitted, the doctors told that she has suffered bone injuries on her shoulder and ankle and she will have to be in hospital for complete two days.

“Initial examination suggests severe bony injuries in her left ankle, foot and bruises, injuries in right shoulder, forearm and neck. The chief minister complained of chest pain and breathlessness since the incident. She has been kept under close watch for 48 hours,” said Dr M Bandopadhya.

The Chief Minister will also go under CT Scan today morning as he has suffered fractures in both her toe and ankle.

After few hours of her admit she developed a slight fever also so, she was shifted to a special ward of the hospital’s VVIP Woodburn Block after her MRI at the Bangur Institute of Neurosciences.

A doctor from those treating Mamata Banejee said, “There are more tests that need to be done and after evaluating her condition, we will decide on our next course of treatment”.

Her X-ray was also taken in Purba Midnapore district soon after the incident in Nandigram.

The state government has ordered a team of five doctors to treat the Chief Minister and she is being treated in a special cabin of Woodburn Block of SSKM hospital.

The team of those five doctors include an endocrinologist, a cardiologist, an orthopedist, a medicine doctor and a general surgery doctor.

Early on Wednesday Mamata Banerjee had filed her final nomination for contesting elections from Nandigram.

An eyewitness to the whole incident, Nimai Maiti said, “The incident happened in front of my shop. At around 6:10 pm, Mamata Banerjee was moving from one temple to another and at this exact spot there is a turn. While she was waving and was half out of the vehicle, people rushed in and that caused the door of her car to slam her leg.”

CM Banerjee has alleged that she was attacked by “four-five men” and has suffered injuries in her left leg and shoulder.

“I was standing outside my car with the door open. I was praying from there on seeing a temple. Few people came around my car and pushed the door. The door hit my leg,” told Banerjee to the media persons.

She was immediately hurried back to Kolkata, where she was admitted in the hospital. Banerjee also said that her leg got swollen and was feeling a chest pain.

Meanwhile, the whole incident TMC MP Abhishek Banerjee, who is also her nephew warned BJP by tweeting, “BJP- Brace yourselves to see the power of people of BENGAL on Sunday, May 2nd”.

In communication with media, the state education minister Partha Chatterjee said, “Cowards have been trying to stop Mamata Banerjee but no one has been able to. Firstly state ADG Law & Order was removed then DG & now with this… I’m surprised to see how EC, who made all changes, is silent. They must take responsibility.”

He also said that the party leaders will also go the Election Commission to put the matter in front of the constitutional body.