Republic day Mayhem – Were they farmers or paid zealots? 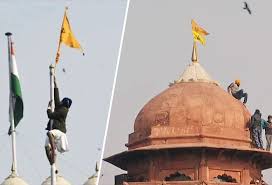 India is celebrating its Republic Day since so many decades across the country and the day is marked by Republic Day parade by India Military and the whole program shows different Indian cultures and diversities.

Many leaders around the world like Queen Elizabeth, late Indonesian President Sukarno, American President Barack Obama, USSR Prime Minister Kosygin and so on has dignified this event by their presence on Republic Day. This occasion together with such leaders signifies India the land of biggest democracy with more than 400 spoken languages, 29 states and 6 different religions.

On this Republic Day of 2021 things were different as the capital of the country was gone under siege due to the major tractor rally to protest against the center’s new farm laws, the protest was proposed to be peaceful but turned out into deadly violence. The tractor rally was led by the farmers who are protesting since the government introduced the farm bills now laws. The farmers are saying that these laws does not guarantee them minimum support price and will exploit the farmers.

They fear that these laws will snatch their status for the main beneficiaries of ‘green revolution’ that created a farming-based prosperity that outstripped the prosperity that farmers elsewhere received under the same schemes.

Not every farmer union is protesting, there are a lot of farmer unions who have welcomed these farm laws and many agricultural institutions have also reduced fears. So those who are protesting are Khalistani Sikhs in Canada, US and India who came over streets to protest and condemn the center and the three laws passed in September 2020.

“We, from the academic world across leading institutes and Universities would like to assure our support to the three farm Acts passed by the Government of India. … This is a golden opportunity for reforms which has been eluding agriculture since the industrial reforms in 1991. We are convinced that the moment has arrived for agriculture and if these reforms are missed, agriculture will have no future in India,” a statement read from one of the academics in agricultural institutions.

The violence on Republic Day made it clear that what happened on Tuesday was not just aimed at the farm laws but on Republic Day. The protests started from thousands of men entered and started breaking police barricades, then rampage of the tractor rally and when the police tried to stop, it turned into violence in which around 300 police personnel were injured, the protestors were attacking the public servants from weapons.

What made the protests different on Republic was that it was not just the mob rule but when the mob started waving swords and chanting “Khalistan Zindabad”. They also entered the iconic Red Fort where a men from the mo climbed the dome and waved a flag with a symbol of ‘Nishan Sahib’ which is seen at all Gurudwaras.

A sikh Harbir Singh has moved from US to India recently and is thinking of opting farming but is confused as he says, “The government policy about agriculture is sound in principle. Punjab and Haryana will run out of water due to policies that promoted growing rice,” said Singh. “The BJP decided that the subsidies given to farmers, that disproportionately favour Punjab and Haryana while doing nothing for farmers in [other states] were not to be allowed to continue,” Singh added.

Later he figured out and said, “In my opinion, Modi made a grave error. Something had to be done about agriculture in these states, but it should have been done with great sensitivity and foresight, and not the way it was done.”