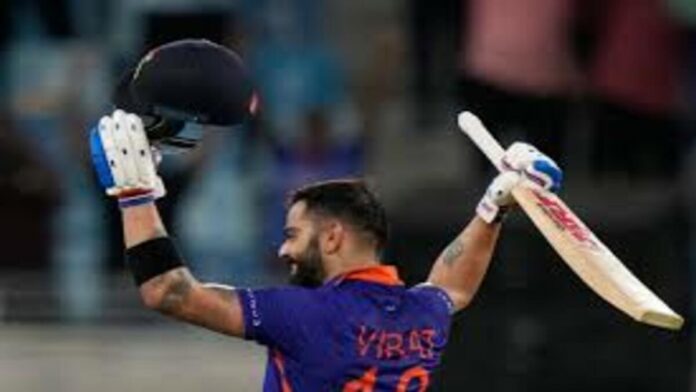 As he finally hit the elusive three-figure milestone after 1020 days, Virat Kohli achieved the most-anticipated hundred in international cricket, helping India defeat Afghanistan by a score of 101 runs and end the Asia Cup’s dead rubber here on Thursday.

After Afghanistan decided to put India in to bat, Kohli scored a superb 122 not out off 61 balls for his 71st international hundred, bringing India to 212 for two.

Afghanistan was completely destroyed by a masterful spell of swing bowling from Bhuvneshwar Kumar, who finished with career-best figures of five wickets for four runs in 24 balls, including 20 dot deliveries. Afghanistan may have still been hurting from their heartbreaking loss to Pakistan the night before.

Bhuvneshwar was able to move the ball both ways at will as the circumstances helped him, leaving the opposition in shambles at 21 for six. At 111 for eight in 20 overs, their innings was over.

However, Kohli stole the show with a remarkable inning that thrilled the hearts of a billion people.

He scored his first century since November 2019 and 71st overall with an unbroken effort off 61 balls, tying Ricky Ponting’s record for most international hundreds. On the all-time list, he is now only slightly behind Sachin Tendulkar. Additionally, it was Kohli’s first century in the shortest format.

Kohli and stand-in skipper K L Rahul (62 off 41) shared a fun 119 off 76 balls for the first wicket after Rohit Sharma was rested for India’s final game of the tournament.

Towards the conclusion of the innings, Kohli began playing with the field and the bowlers, which was sufficient proof that he was back to his best. Rahul’s strike was his most assured since making a comeback from injury.

The openers excelled against spinners, notably Rashid Khan (0-33), which was a weakness they wanted to work on before the T20 World Cup.

When Kohli moved out to the spinners, pierced the field expertly, and even played a rare sweep shot, it was classic Kohli on display.

The sweep shot was played during Mujeeb Ur Rehman’s sixth over of bowling. He came down the track to knock a straight six on the following ball.

The former India skipper was dropped in the deep off Mohammad Nabi in the eighth over, which was fortunate on his path to a spectacular hundred.

India appeared to be headed for a huge total when it reached 87 for no loss in 10 overs with Kohli in top form.

With a sharp pull shot off bowler Fareed Ahmed, Kohli finally hit the elusive three-figure mark as it began to pour boundaries in the final five overs. He removed his helmet, embraced teammate Rishabh Pant, grinned in shock, and then kissed his necklace to mark the victory.

He struck two sixes and a four against Fazalhaq Farooqi to put India over 200 runs for the innings. He treated the bowlers with contempt, and his quick footwork made it clear that “King Kohli” was definitely back.

When he went out to lift the cunning Rashid for a maximum over deep midwicket, Kohli once again showed his unwavering confidence.

Since Kohli is accustomed to holding the top spot, there is a strong argument to maintain him there alongside Rohit following his outstanding performance.

India put on a professional performance in their Super 4s final match, but their early withdrawal from another multi-team competition has created additional uncertainty ahead of the T20 World Cup, which begins next month.

India struggled in the continental competition because to their frequent lineup changes and lack of bowling depth.

The Indian think tank still has a lot to do because series against Australia and South Africa are scheduled before the ICC tournament in Australia.