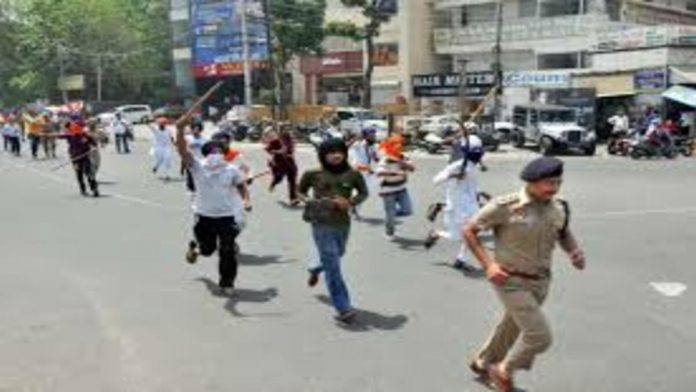 Tensions emerged after two different groups clashed outside a Kali Mata temple in Patiala during an anti-Khalistan rally and four people including two policemen, we’re injured. In the clash swords were waved along with stone pelting.

In a bid to calm the violence, the right-wing outfits have sought to threaten a citywide bandh and arrest of all those who pelted stones and tried to enter the temple.

The clash broke out in Patiala over a “Khalistan Murdabad March” on Friday. Hindu organisations have called for citywide bandh and have urged for arrest of “Khalistani supporters”.

According to Singh, so far four FIRs have been registered in connection with the violence.
Mobile services have also be shut down after 11-hour of curfew in the city. As per the government, internet and SMS services will remain suspended between 9:30 am and 6:00 pm on Saturday to restrict the sharing of “inflammatory material and false rumours”.

Patiala Inspector General of Police Rakesh Agarwal was fired from his post after the violence broke out in the city.

Currently the situation is under control after curfew was imposed between 7 pm on Friday and 6 am on Saturday in Patiala. Heavy police security have also been deployed to maintain law and order.

Some party workers have also been suspended as they were allegedly involved in the violence. Shiv Sena’s Punjab unit’s party president Harish Singla have even been arrested for his alleged role in the violence. He was expelled from the party just a couple of hours after the clash broke out.

The clashes emerged after a group which calls itself the Shiv Sena (Bal Thackeray) led a “Khalistan Murdabad March” and competed with a gathering of Sikh activists, including some Nihangs. The two groups started sloganeering and tossing pelting at one another.

Soon after the clashes broke out, Punjab Chief Minister Bhagwant Mann called for a high-level meeting with officials. After the meeting, the Chief Minister announced that he has ordered for an investigation into the matter and has strictly asked that no one guilty is spared.

“Anti-Punjab forces will not be allowed to disturb Punjab’s peace at any cost,” he also said.