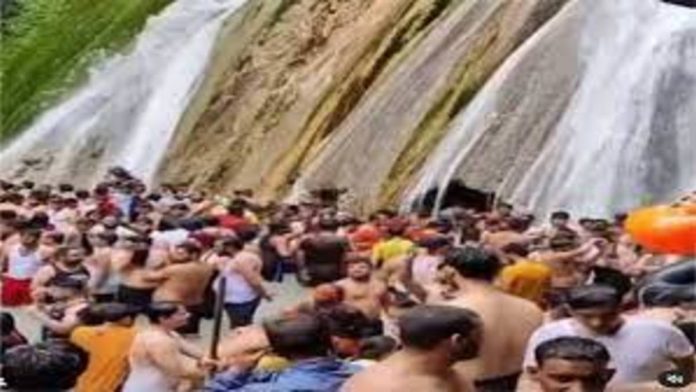 Tourists flooded to Mussoorie and Nainital, Uttarakhand’s key holiday spots, once Covid-19 restrictions were lifted, in a situation that was disturbingly identical to Himachal Pradesh. People flocked to the hills to escape the heat of the plains, which resulted in overcrowding in hotels and long lines of automobiles on the streets.

Meanwhile, on Wednesday, a video of hundreds of visitors bathing at Mussoorie’s Kempty Falls appeared on the internet and quickly went viral on social media. As people assembled at the popular tourist attraction, social distance was definitely thrown out the window. There was not a single individual wearing a mask.

The short video was first uploaded by Infobug, a Twitter account, and has since been reposted by a number of other sites.

When the video went viral, it angered a lot of people. People violating Covid-19 regulations angered social media users. A user commented, “Empty brains in Kempty.” “This is a power move: nahao and mar jao,” says another user.

In addition, one of the users stated, “They all collectively share only one braincell.”

Kuldi Bazar and Mall Road in Mussoorie are extremely busy. Due to an increase in the number of tourists, Nainital experienced a similar issue.