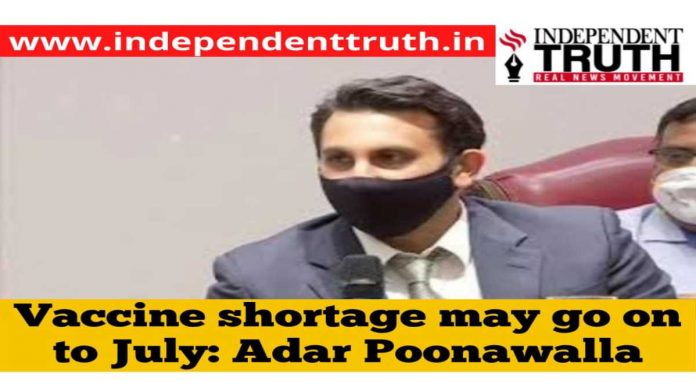 As the country’s surge in Covid-19 cases the demand for vaccine have risen substantially since last few days after the Centre announced vaccination for all above 18 from May 1. Owing to the demand the chief executive of the Serum Institute of India Adar Poonawalla has said that the vaccine shoratge may go on to till July.

The government did not think that the pandemic will hit again as the cases were on continuous decline till mid February, he said adding “Everybody really felt that India had started to turn the tide on the pandemic,” said Poonawalla.

“I’ve been victimised very unfairly and wrongly,” he said. And the reason behind why the production was not ramped up earlier because “there were no orders, we did not think we needed to make more than 1bn doses a year”.

Mr Poonawalla in an interview to ‘The Times’ told that he had been recieving threats over sudden “pressure and aggression” over demand of Covid-19 vaccines and that he and his family has shifted to London temporarily to avoid threats.

Telling about the Covidshield production in Pune on Saturday he tweeted, “Pleased to state that COVISHIELD’s production is in full swing in Pune. I look forward to reviewing operations upon my return in a few days,” He however did not mention anything about his returning back to India.

The SII cheif was also given “Y Category” security by Centre after reviewing the details of threats.