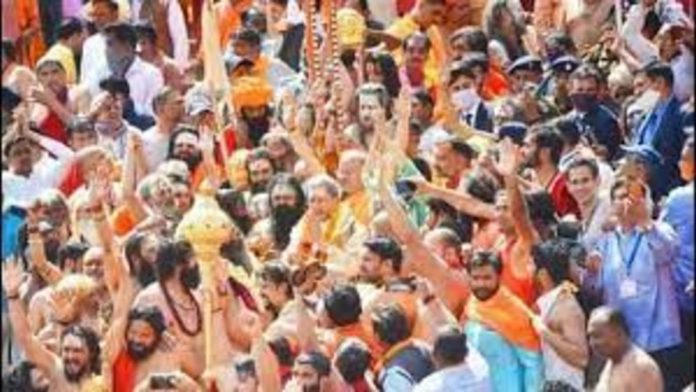 The state health department lodged an FIR against Max Corporate Services, Delhi-based Lalchandani Labs and Hisar-based Nalwa Labs on the complain by Haridwar chief medical officer Shambhu Kumar Jha. The three labs were charged for spreading disease, negligence, cheating and criminal conspiracy, and under sections of the 2005 disaster management act and the 1897 epidemic diseases act.

Meanwhile, defending himself CM Tirath Singh Rawat said, “I came in March and this is an old issue. When we got information about this, we immediately instituted an inquiry… Strict action will be taken against the guilty”.

The new CM Tirath Singh Rawat had supplanted Trivendra Singh Rawat in March this year, weeks before when the big holy event was about to start. The first decision taken by the CM Rawat was approving this Kumbh Mela despite specialist’s warning against non-maintenance of Covid appropriate behaviour and lack of testing at the time when country was facing increasing coronavirus cases.

From January 14 to April 27 nearly 9.1 million pilgrims took the holy dip in the Ganga. 6 million of this were congregated in April at the time of worst surge of Covid-19 cases in the country.

This fake Covid-19 tests scam was lid off after a man from Faridkot complained that had received a message for collecting his test report without even giving any sample. His complain triggered an investigation that unearthed roughly 100,000 fake rapid antigen tests.

This happened as the state High Court had asked for 50,000 tests every day. Real-time data checking through the Indian Council of Medical Research (ICMR) portal revealed fake entries on basis of mobile numbers and addresses of people who were never tested. Many people said they had not even visited Haridwar in April.