US President Warns Ukraine Of Possible Attack By Russia 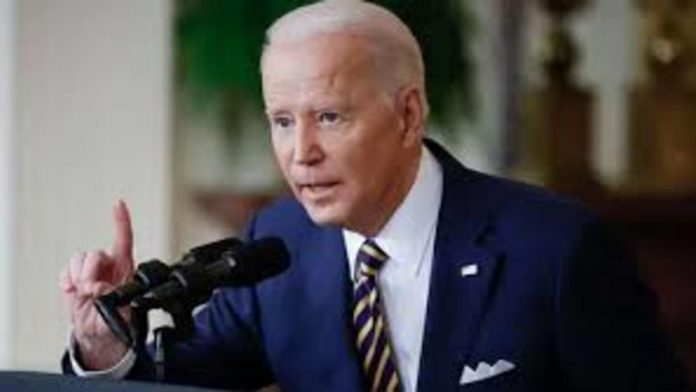 In one of the most serious post-Cold War crises, Russia seeks to prevent Kyiv from joining NATO and accuses the West of hysteria, claiming that it has no ambitions to invade, while the US and its allies insist on continuing their military build-up. The evacuation of hundreds of thousands of people to Russia was declared by rebel officials in Donetsk and Luhansk on Friday, prompting warning sirens.

US President Joe Biden warned on Friday that Russia’s Vladimir Putin has chosen to invade Ukraine within days, after rebels supported by Moscow instructed residents to leave breakaway territory on buses, a move the West thinks is a pretext for an invasion.

“We have reason to believe Russian forces are planning and intending to strike Ukraine in the coming week, in the coming days,” Biden said at the White House, adding that Kyiv will be a target.

“As of right now, I am confident he has made his decision.”

Russian news agencies later reported that two explosions hit Luhansk, one of the largest cities in Ukraine’s breakaway People’s Republic of Luhansk, and that a piece of a gas pipeline in the area caught fire, citing journalists on the ground.

According to UN Secretary-General Antonio Guterres, the world is arguably more dangerous now than it was during the Cold War. Guterres warned that even a minor blunder or misunderstanding between great nations might have disastrous consequences.

“I am frequently asked whether we are in the midst of a new Cold War,” Guterres remarked in his opening remarks at a Munich security conference. “My response is that the threat to global security is more complex and likely worse now than it was then.”

“There were procedures that permitted the protagonists to analyse risks and employ back-channels to prevent crises during the decades-long standoff between the Soviet Union and the United States in the twentieth century,” Guterres said. “Many of those systems are no longer in use, and the majority of the people who were taught to utilise them are no longer with us.”

Deputy National Economic Council Director Daleep Singh told reporters at a White House briefing Friday that the US has chosen to hold off on at least one of the most punishing financial options available to penalise Russia if it invades Ukraine.

One of the most destructive acts the US might take against Russia’s economy was to kick Russia out of the SWIFT financial system, which transports money across the world, but it is opposed by several European allies because of the spillover damage it would do to their economies as well.

When asked if the US and its European allies were on the same page on particular financial penalties, Biden said he expected “slight disagreements.” Many of them are more exposed to any collateral harm from sanctions striking Russia’s economy.

In the Donbas area of Ukraine, where conflict between Ukrainian forces and Russian-backed rebels has killed more than 14,000 people since 2014, the rebels announced in videos released online Friday that they were ordering a “urgent evacuation” to Russia due to the turmoil.

The video files, however, had metadata included in them that indicated they had been made two days before.

In the 24 hours leading up to Thursday midday, a group of international monitors tasked with keeping the peace in eastern Ukraine reported more than 500 explosions.

On Friday, a car exploded outside Donetsk’s main government building, but no one was injured, while a UN Refugee Agency convoy was shelled.

Ukraine is accused by the rebels of planning an invasion of the region, which Kyiv rejects. The turmoil could be part of Moscow’s alleged plan to portray Ukraine as the aggressor, giving Russia justification to invade.

Putin dispatched his emergency minister to the Rostov region on the Ukrainian border to assist with the evacuation. He instructed the government to give each evacuee 10,000 rubles (about $130). This is around half of the average monthly wage in the area.

The United States and the United Kingdom are accusing Russia for cyberattacks this week that targeted Ukraine’s defence ministry and key banks.

The attacks this week had “minimal impact,” according to Anne Neuberger, the White House’s chief cyber officer, because Ukrainian officials were able to swiftly restore their systems, but it’s possible that the Russians were laying the framework for more severe ones. She and the British Foreign Office blamed Russian military intelligence officers for the strikes on Tuesday.

Putin will observe drills involving Russia’s strategic nuclear forces from the Russian Defense Ministry’s situation room, according to the Kremlin.

Putin will personally oversee Saturday’s exhibition of his country’s nuclear might, according to the Defense Ministry. The scheduled drill includes the Black Sea Fleet, which is based in Crimea. After conquering the Crimean Peninsula from Ukraine in 2014, Russia annexed it.

The new US estimate of up to 190,000 people includes Russian-backed rebels in Ukraine, the Russian National Guard, and Russian forces in Crimea, which Russia annexed from Ukraine in 2014. Previous estimations of troops positioned near Ukraine’s borders and in neighbouring Belarus did not include these units.

A US defence official claimed that an estimated 40% to 50% of the ground forces positioned near the Ukrainian border have moved into offensive positions closer to the border, indicating that the Russians are preparing for a possible invasion. To discuss internal US military assessments, the defence official spoke on the condition of anonymity.

The number of Russian ground units known as battalion tactical groups deployed in the border area has increased to 125, up from 83 two weeks ago, according to the official. There are 750 to 1,000 soldiers in each brigade tactical group.

NATO is beefing up its eastern territories in the meantime.

The United States has started sending 5,000 troops to Poland and Romania. On Friday, the Biden administration announced that a $6 billion sale of 250 Abrams combat tanks and related equipment to Poland had been approved.

Hundreds of British soldiers are being sent to Poland, and more warships and planes are being offered. In Estonia, it is also boosting the number of people and sending tanks and armoured battle vehicles.

Additional troops are being sent to Lithuania by Germany, Norway, and the Netherlands. A total of 100 sniper rifles, battle helmets and body armour, two mine detection robots, and weapon detection radar systems are also being sent to Ukraine by the Dutch government.

According to the White House, Biden spoke via phone on Friday afternoon with a number of European presidents, as well as the leaders of the European Union and NATO, regarding the possibility of Russian attack.

On the call, French President Emmanuel Macron planned to speak with Ukrainian President Volodymyr Zelenskyy on Saturday and Russian President Vladimir Putin on Sunday. The biennial Munich Security Conference in Germany was attended by US Vice President Kamala Harris and Secretary of State Antony Blinken. There were no Russian delegates in attendance.

Harris stated that the alliance’s strategy for dealing with the situation would not change.

“As it relates to the debate and negotiations we have had with Russia, we remain, of course, open to and eager of diplomacy,” Harris said in Munich.

“But, if Russia takes aggressive action, we are also committed to ensuring that the penalties we discussed have severe consequences,” she added in a meeting with NATO Secretary-General Jens Stoltenberg.

“It would have been crucial to see Russian representatives in Munich, especially in the current, extremely hazardous scenario,” Baerbock added. She went on to say that even small steps toward peace are “better than a giant stride toward conflict.”