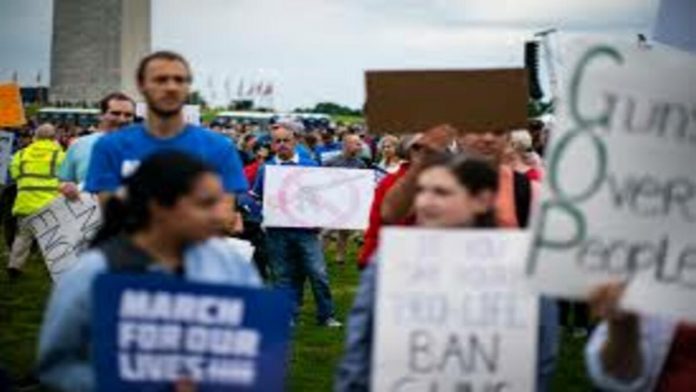 A day after a Supreme Court decision that significantly expanded gun rights, the US House of Representatives on Friday enacted important gun safety legislation for the first time in thirty years and forwarded it to President Joe Biden for signature.

The bill passed the House 234–193 in favour. The motion received the support of 14 Republicans, with no Democratic opposition. Major law enforcement organisations backed it, and the National Rifle Association and American gun manufacturers suffered a rare setback as a result of its ratification.

The law was approved by the Senate late on Thursday, 65-33, with 15 Republicans voting in favour, including Senate Minority Leader Mitch McConnell.

The White House said that Biden will sign the legislation on Saturday morning.

With numerous attempts to impose new restrictions on gun sales failing time and time again until Friday, gun control has long been a contentious topic in the United States.

Democrats, including Biden, wanted the bill to go further, but it does not. It has provisions that would assist states in keeping firearms away from people regarded to be a danger to themselves or others and closing the infamous “boyfriend loophole” by prohibiting the sale of firearms to people found guilty of abusing unmarried intimate partners. High-capacity magazines and assault-style weapon sales were not prohibited, though.

During discussion, House Speaker Nancy Pelosi remarked, “The proposal… incorporates multiple significant initiatives to save lives, not only from horrific mass shootings but also from the everyday carnage of gun crime, suicide, and sad accidents.”

The measure does advance background checks by making it possible to access data on serious juvenile offences for the first time. It also prohibits the sale of firearms to people who have been convicted of domestic abuse. It gives states that enforce “red flag” legislation meant to take away firearms from those judged dangerous to themselves and others new federal funds.

The Brady gun control group noted that there are “100 people killed with guns every day” in America and called the “Bipartisan Safer Communities Act” “the strongest gun violence prevention bill in the previous 30 years.” Suicide accounts for a large portion of the fatalities.

Representative Jim Jordan, the senior Republican on the House Judiciary Committee, stated that “now they (Democrats) are coming for law-abiding American people’ Second Amendment privileges.” He was referring to the broad protection that conservatives believe the constitutional right to “keep and bear guns” should receive.

The Supreme Court invalidated the restrictions on the carrying of concealed pistols outside the home on Thursday by a 6-3 conservative majority. The 1913 law was ruled to be unconstitutional by the court.

Following the massacres in Uvalde and Buffalo that left more than 30 people dead, including 19 elementary school children, this decision and the gun safety legislation that was passed on Friday show how deeply divided Americans are over firearms in this country.

The National Rifle Association, the most influential gun lobby in the country, hailed the court decision as “a tremendous success” for gun owners in the United States.

It criticised the legislation enacted by Congress on Friday, calling it “senseless” and certain to “infringe on the rights of the law-abiding.”

The scope of the legislation passed by Congress is considered limited for a country with the highest per capita gun ownership in the world and the highest yearly number of mass shootings among developed nations.

According to a report released on May 10 by the US Centers for Disease Control and Prevention, the rate of gun deaths in the US increased by 35 percent in 2020 to reach its highest level since 1994, with young Black men dying at disproportionately high rates.

Teams From Taliban Visited Zawahiri And Asked Not To Indulge In Terrorism: Sources

Ayman al-Zawahiri, the commander of al-Qaida, was killed by a drone hit on Tuesday in his safe home in Kabul, according to reliable sources. According...
Read more
WORLD

Rishi Sunak has officially become the closest someone of Indian descent has ever been to becoming prime minister of the United Kingdom after receiving...
Read more
WORLD

Rishi Sunak Front In Race To Become UK Prime Minister, As He Tops In 3rd Round Of Voting

In the most recent round of voting by Conservative MPs on Monday to choose Britain's next prime minister, former finance minister Rishi Sunak increased...
Read more
WORLD

3 Killed, 2 Injured After Gunman Opens Fire At Indiana Mall In US

The authorities reported that a guy opened fire at the food court of the Indiana State Mall in the United States, killing three people...
Read more
- Advertisement -