Uddhav Thackeray Shifts Back To Family Home From Official Residence 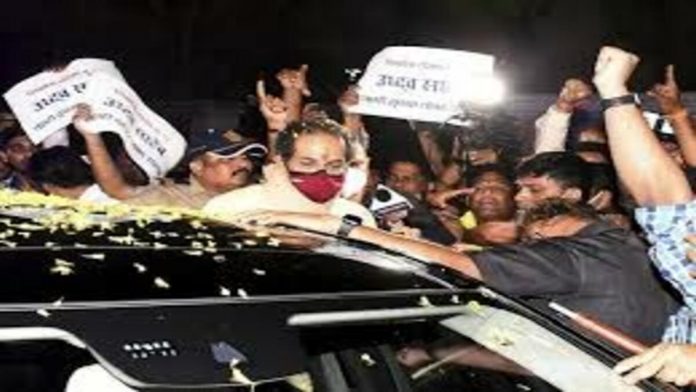 After delivering an emotional speech for the party rebels, Maharashtra Chief Minister Uddhav Thackeray has shifted back to his family home “Matoshree” from “Varsha” his official residence.

Late on Wednesday evening, people assembled outside Matoshree for solidarity. Videos of Mr Thackeray coming out of his car to greet the visitors. Mr Thackeray’s son Aaditya Thackeray also greeted the party workers.

Despite being positive for Covid, Uddhav Thackeray’s shift to his family home is itself a message.

During his Facebook live address as his first public response to the ongoing political crisis in state he said, “If my own people don’t want me as Chief Minister, he should walk up to me and say so… I’m ready to resign… I am Balasaheb’s son, I am not after a post… If you want me to resign, let me resign and take all my belongings to Matoshree”.

In the live address he even questioned, “I’m willing to step down, but can you promise me that the next chief minister will be from Shiv Sena?”

This was understood as a challenge to the party rebel Eknath Shinde, who has been claiming to be the real Shiv Sena and following ideology of Shiv Sena founder Balasaheb Thackeray, signalling that the party leadership under Uddhav Thackeray was a “lite” version.

It is practically not possible for the rebels to wish toppling Shiv Sena government and helping BJP come to power.

The reason behind the end of the alliance can be owed to BJP’s denial to offer Mr Thackeray the top post.

Meanwhile, sources from the Congress have claimed that NCP Chief Sharad Pawar along with other allies of the ruling allies have suggested to offer the top post to Mr Shinde to resolve the dispute.

However, there are speculations doing rounds that an offer was made to the rebels through back-channel talks.

Today morning, Mr Shinde and his supporters made their effort strong by sending a letter to the Governor and the Deputy Speaker of the state assembly.