The deal came after a two-week long standoff over the timing of the impeachment trial, which could put Trump behind the bars from holding public office permanently. 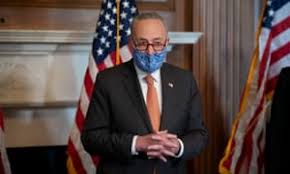 Trump’s impeachment trial will commence from February 9, which is being delayed by two weeks. This comes after a deal signed for high- stakes proceedings on whether incited violence in US Capitol on January 6.

The deal was made by Senate Majority Leader Charles Schumer, D-N.Y., and Minority Leader Mitch McConnell, R-Ky., after a two week long standoff over the timing of the impeachment trial, which could put Trump behind bars from holding public office permanently.

The White House leaders could have demanded an immediate trial but the delay favours the former and current Presidents as Trump needs to find a legal team for his defense and Biden needs to form his cabinet. However, the House had sent an impeachment article on January 13, alleging “incite of insurrection”.

Schumer announced a two-week timetable on Friday and said that this wait would allow Senate to appoint Biden’s nominations and to make progress in Biden’s legislative agenda of $2 trillion pandemic relief proposal.

“We all want to put this awful chapter in our nation’s history behind us, but healing and unity will only come if there is truth and accountability, and that is what this trial will provide,” said Schumer in a statement.

McConnell’s spokesperson Doug Andres also called the deal, “a win for due process and fairness.”

If there would have no agreement then the trial would have started on Tuesday and could have run without any interruption until Senate’s verdict. However, the agreement does not resolve conflict between McConnell and Schumer on how the Senate will handle a 50-50 partisan with newly elected Vice President Kamala Harris breaking ties in Democrats favour.

There was a  debate going on throughout the day on the timing of the trial. In the announcement of transmitting a single article to Senate on Monday, Pelosi said in morning that “Trump will have had the same amount of time to prepare for trial as our managers.”

On the other hand in that meantime, Schumer and McConnell continued to discuss the “timing and duration” of the trial.

However, McConnell and other Republican senators warned that rushing into the trial after the rapid House impeachment will taint it.

“Senate Republicans strongly believe we need a full and fair process where the former president can mount a defense and the Senate can properly consider the factual, legal and constitutional questions at stake,” McConnell added.