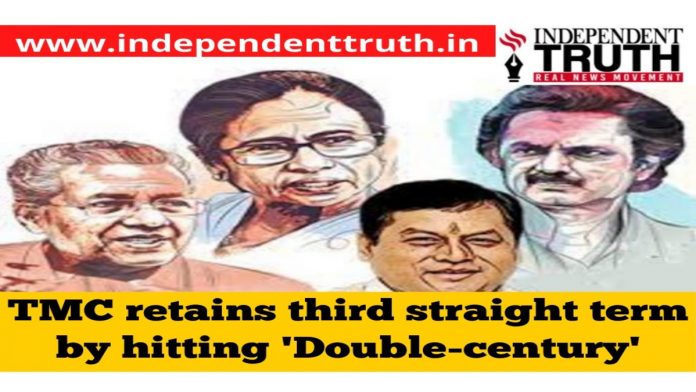 Bengal tigress Mamata Banerjee on Sunday has won an one-sided victory in bengal over BJP in the state assembly polls which held amid the crippling pandemic. In Kerala LDF has retained power creating history. In Tamil Nadu power has shifted to DMK after 10 years and in Assam BJP has again retained power for next five years.

Leading TMC on 213 mark out of total 294 assembly seats Mamata Banerjee said “Bengal has saved India”. She ridiculed BJP’s defeat which had a total count of below hundred after winning the “double century”.

However, having the state lead she has been defeated by her protege-turned-arch-rival Suvendhu Adhikari in her constituency – Nandigram. Last year Adhikari had quit TMC to join BJP. “I accept the verdict, it is not a big thing,” said Ms Banerjee saying that she will go to court against malpractices.

Meanwhile, BJP which has been the biggest opposition party to the ruling TMC in Bengal has gained a good consideration by winning almost 80 seats as compared to 2016 when it just won 3.

In Kerala these elections have broken the 40 year record of getting reelected by electing LDF again with 99 seats out of total 140 seats. The Congress-led UDF won 41.

In Tamil Nadu MK Stalin’s DMK has returned in power with 158 seats against AIADMK’s 76. AIADMK had been ruling the state for 10 years.

In Assam BJP has comfortably retained power by winning 75 seats out 126 assembly seats.

Leaving Congress behind also in Puducherry AINRC led by N Rangaswamy has won by getting a lead of 16 seats over Congress’s 9 out of total 30 assembly seats. BJP is also a part of AINRC.

Polling for these election took place starting March 27 to April 29. During which the country has been reporting daily high Covid-19 spikes. The country was somewhere reporting between 20,000 to 30,000 cases till the second week of March. On the starting day of election that is on March 27 there were somewhat 62,000 cases but now at the end of the elections the country has been reporting more than 3 lakh cases per day for more than 10 days. It even crossed the mark of 4 lakh on Saturday.

Until the elctions started and during the half election phases all political leaders including the Prime Minister Narendra Modi conducted massive political rallies without following any safety rules and fully disregarding the Covid appropriate behaviour.