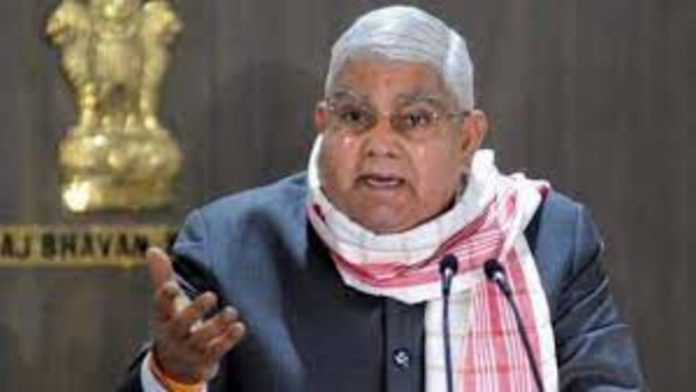 Governor Jagdeep Dhankhar came into question after he permitted prosecution of the four TMC leaders as West Bengal’s ruling Trinamool Congress (TMC) confronted another crisis on Monday following the arrests of four of its heavyweight leaders in the Narada sting operation case, with the previous coming in for analysis from political circles.

On May 9, Raj Bhawan said in an explanation that the Governor gave sanction to the CBI against three TMC MLAs, Madan Mitra, Subrata Mukherjee and Firhad Hakim, and the former party leader Sovan Chatterjee. A heated contrversy has broken out over the competent authority after the assent; in the ordinary course of occasion “The CBI has to seek sanction from the assembly speaker to file a charge sheet against a member of the House. I do not know under which provision and with what intention the governor gave such a clearance to the CBI. I was completely bypassed,” said Bimal Banerjee, the Bengal assembly spokesperson.

A noted lawyer and the Rajya Sabha member Ranjan Bhattacharya said, “Why is the TMC blaming the governor? This is a legal issue and the probe was ordered by the Calcutta HC and SC. However, the governor’s recent activities and statements show that he is acting in a partisan manner.” TMC spokesperson Kunal Ghosh said, “He came to Bengal as an agent of the BJP. It has been proved once again.”

Meanwhile, the general secretary of Bengal BJP Sayantan Basu, however, said the governor acted in accordance with the law. “He is aware of the Constitutional provisions,” he said.