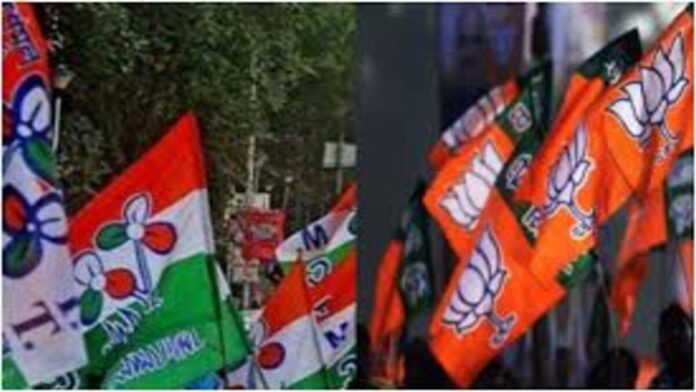 Suvendu Adhikari, the leader of the opposition in the Bengal Assembly, was met with black flag protests on Thursday while speaking at a rally in the Hooghly district’s Tarakeswar. Following this, there was a fight between the BJP and TMC supporters, and both sides threw rocks at one another.

Three of the at least 10 injured during the altercation were taken to Tarakeshwar Gramin Hospital for medical attention. Seven patients were treated with first aid and then released.

Suvendu Adhikari, a BJP politician, was allegedly flashed black flags by TMC personnel when he traveled to Tarakeswar to speak at a political gathering.

According to a police official, a number of individuals waved black flags at the parade, which caused the saffron party participants to charge the agitators, according to news reports.

The event was held to denounce the TMC government over suspicions of corruption, and BJP activists said that TMC members were attempting to disrupt it. Senior leader Rahul Sinha also alleged that the attendees had been stoned.

Subhendu Adhikari stated to the reporters, “They threw stones at us. On us, at least five stones were thrown. More than a thousand thugs came in. What occurred today is the fault of the cops.

“The TMC is afraid; the party senses growing popular resentment toward its establishment. In order to get their way, they are using violence against BJP leaders like Suvendu Adhikari. But we have people with us. In preparation for the massive “Nabanna Abhijan” march to the secretariat on September 13, supporters of the saffron party have been holding rallies throughout the state, according to BJP leader Rahul Sinha. They are calling for the removal of “scam-tainted” TMC leaders.

Santanu Sen, a Rajya Sabha member for the TMC, refuted Sinha’s claim by claiming that the BJP was responsible for the daytime disruptions in Tarakeshwar.

“The BJP is aware that it has no constituency. They therefore have a dire need to incite unrest and spread anarchy throughout Bengal. Sen emphasized that TMC activists had no involvement at all in today’s incident.

He added that despite their evil schemes to overthrow the democratically elected Mamata Banerjee government, the “people of the state are with the TMC and sectarian, fascist groups like the BJP would find no place in West Bengal.”