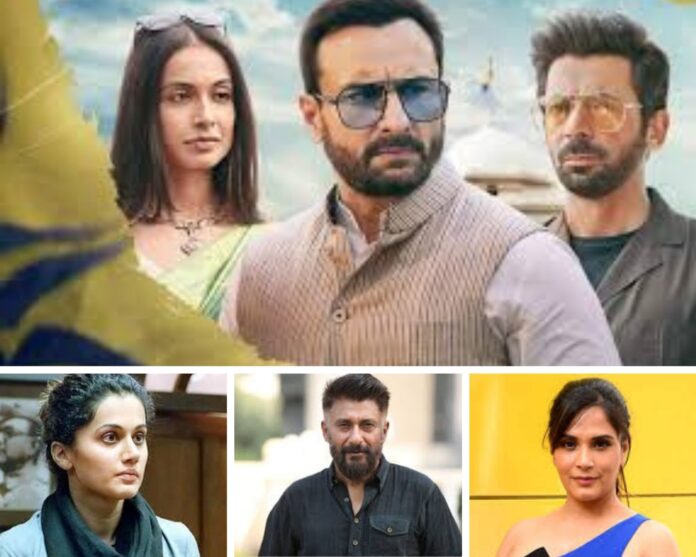 There have been so many controversies going on in bollywood as from an apology of team ‘Tandav’ to threats to Richa Chadha for her upcoming movie ‘Madam Chief  Minister’.

Here are briefs of those trending controversies:

Team Tandav’s unconditional apology, leaving the events of another bustling day behind us, it’s time to look back at the abundant newsmakers in the entertainment world who have made it trending entertainment news today. The makers of web series ‘Tandav’ has been accused of hurting religious sentiments for which several FIRs has been lodged, However the makers of the series have already issued apology in the matter.

A fatwa has been issued to director Vivek Agnihotri who posted two pictures of his team having food at a Srinagar hotel. Although, the bunch was having a vegetarian thali as the photos showed but Agnihotri captioning the pics as “Nobody knows how to make a vegetarian Wazwan in Kashmir. But I am here to bring about a change. #TheKashmirFiles.” Which drove so much controversy.

Richa Chadha who will be seen in her upcoming movie ‘Madam Chief Minister’ releasing tomorrow is receiving by Nawab Satpal Tanwar, who is reportedly the founder of Akhil Bhartiya Bhim Sena.

Satpal is continuously uploading instigative videos and posts on social media to spread hatred against her and her upcoming movie.  receiving death threats for Madam Chief Minister to team Tandav’s unconditional apology,

Taapsee Pannu revealed some untold secrets of Bollywood’s male A listers, like she said, “There have been times when actors, who have done lesser films than me, refused to co-star claiming there was nothing ‘heroic’ about their part. Not just me, Deepika Padukone, who has worked with such big names, had to work with a fabulous actor like Vikrant Massey in Chhapaak, Kangana Ranaut paired up with Jassie Gill for Panga, Alia Bhatt with Vicky Kaushal in Raazi, Vidya Balan with Manav Kaul for Tumhari Sulu. You see the pattern? Actresses never do that.”

All these are trending in bollywood and receiving full media coverage.