Taapsee Pannu will be seen next in Anurag Kashyap's Dobaaraa. The duo had earlier worked together in Manmarziyaan (2018). 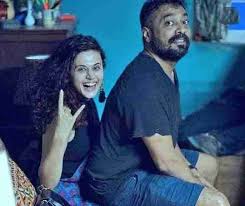 Taapsee Pannu is all pumped up to reunite with Manmarziyaan director Anurag Kashyap. The actress-director duo is collaborating again for a sci-fi film, Dobaaraa. Taapsee took to Instagram to share a photo of herself with the filmmaker to announce the commencement of the project. She wrote that some collaborations deserve to be repeated.

On Monday, February 22, Taapsee Pannu shared a fun photo of herself with Anurag Kashyap. In the photo, the actress is seen sitting on a chair, while the director sits on her lap. Taapsee can be seen smiling with her hand on her forehead. Anurag makes a peace sign with his fingers. The actress is elated to be reuniting with her Manmarziyaan director and wrote that they are ready to create more memories.

Sharing the photo, Taapsee Pannu wrote, “My #DobaaraaSeries Coz some collaborations deserve to be repeated…. Ready to create more memories because we were running out of Manmarziyaan stories to tell… @anuragkashyap10 let’s do this #Dobaaraa (sic).”

The announcement teaser of Dobaara gives a glimpse into the film. In the teaser, Taapsee Pannu is seen looking at film scripts lying on a table. She later asks Alexa to switch on the television. After listening to the news, she asks Alexa to play a film that is edgy and has a vibe. And then, Anurag Kashyap starts interacting with her through the television and asks her to do a film with him. Taapsee is shocked to see Anurag on her television. She asks him how he entered her TV. The filmmaker asks her if she believes in time travel. The actress and filmmaker then talk about the film, whose script Anurag had sent to her. He says, “Time kya hai. Naam hi time hai aur time hi naam hai.” Taapsee looks at the watch and says, “Do baarah.”

Looking at the teaser, it can be said that Dobaaraa is going to be an exciting sci-fi.