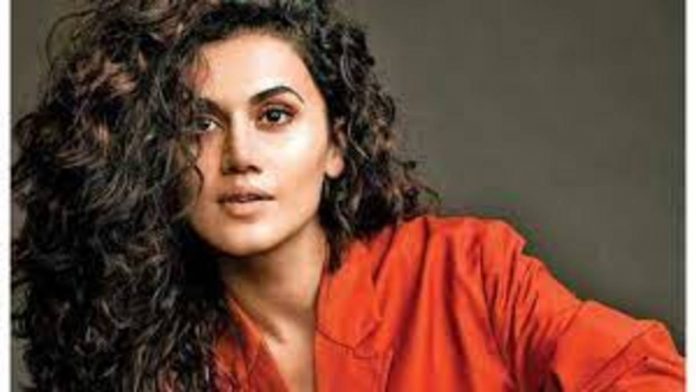 Taapsee Pannu, a Bollywood actress who has worked in the industry for over a decade, is about to embark on a new chapter in her career by launching her own production company, “Outsiders Films”. Taapsee Pannu took to her social media networks on Thursday to announce the launch of her production company and the first film she will produce.

Taapsee expresses her delight at the inauguration of the production studio, saying, “I am thrilled to embark upon this new journey and diversify my love for cinema with my production house ‘Outsiders Films’. Having my business ventures, management comes naturally to me. Hence, I always thought of setting my own production house. The audience and the industry have given me a lot of support and love over the 11 years of my career. With Outsiders Films, I aim to give back to the industry and empower talent who are looking for a breakthrough and come with no background like me. Pranjal and I together look forward to opening doors for new and fresh talents, both in front and behind the camera.”

Blurr, the title of her first film, was also revealed. “And here’s the first one of the slate The chill to match the thrill! #BLURR! @zeestudiosofficial , #OutsidersFilms & @echelonproduction come together for an edge of the seat thriller. Directed by #AjayBahl , starring @taapsee.”

Mathias Boe, her partner and a former badminton player, stole the event with his remark. “I’ll do a movie for free. Hit like if you wanna see me in a Bollywood movie,” he wrote.

Taapsee also uploaded a photo of herself and her partner Pranjal Khandhdiya on Instagram.

Taapsee has teamed up with Pranjal, a content developer and producer with over 20 years of experience, for her new initiative. He has worked on films like as Super 30, 83, Soorma, Piku, Mubarakan, and Azhar, and is currently working on Rashmi Rocket, starring Taapsee Pannu.

When it came to naming the company, Taapsee said, “Pranjal and I both come from humble backgrounds that’s when the name Outsiders Films clicked with us. We aim to produce meaningful, entertaining, and quality content.”

Outsiders Films, according to the actor’s production crew, will do ground productions for all of the projects they’re involved in rather than relying on profit-sharing agreements. The production house’s debut movie will be a thriller starring Taapsee Pannu.

This isn’t the first time Taapsee has experimented in business; the 33-year-old actress also owns a wedding planning company and a badminton team known as 7 Aces Pune. She was most recently seen on Netflix in Haseen Dilruba. She has a run of films coming out, including Looop Lapeta, Rashmi Rocket, DooBaaraa, and Shabaash Mithu, a sports biography about Indian cricket team captain Mithali Raj.