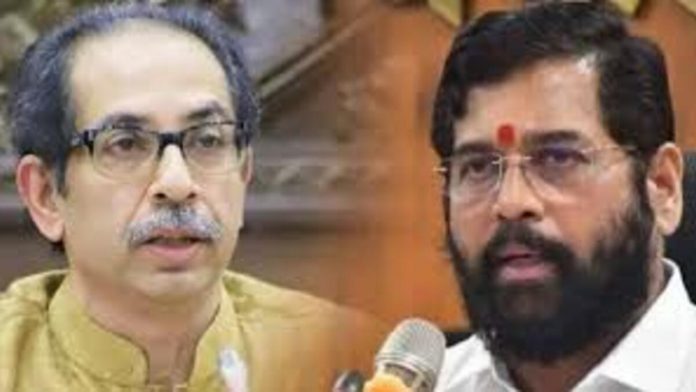 The Supreme Court announced on Thursday that it will determine by August 8 if it needs to submit the issues raised in a number of petitions by opposing Shiv Sena factions to a five-judge Constitution Bench.

The Election Commission of India (ECI) was also urged not to take immediate action on the Eknath Shinde faction’s request for recognition as the original Shiv Sena by the bench of Chief Justice of India N V Ramana, Justices Krishna Murari, and Hima Kohli.

After Uddhav Thackeray resigned as Chief Minister of the Maha Vikas Aghadi administration in June of this year, the Shinde faction split apart from the Thackeray-led Shiv Sena and partnered with the BJP to create a government in Maharashtra.

The bench advised the ECI to consider granting a reasonable delay if the Thackeray faction requested more time to submit its response to the notice sent by the Commission in response to the Shinde faction’s plea.

Senior Advocate Harish Salve, who is representing the Shinde faction, stated that one of the issues to be resolved is whether disqualification under the Tenth Schedule occurs only when the Speaker makes a determination that the alleged delinquent member has either voluntarily abandoned membership of the original political party from which he was elected or has voted against a party directive.

In the event that a disqualification petition is filed and is still pending against a person, may they still act as members of the House and take part in House proceedings? he asked.

Salve added that since the Thackeray faction claims that the Speaker cannot be trusted, the court will first have to decide whether there is a disqualification. Another issue is whether a writ can be filed in the High Court or Supreme Court to invite a decision by the court on disqualification proceedings under the Tenth Schedule bypassing the Speaker.

Salve argued that it is “very crucial” to determine if a member’s vote in opposition to a party direction might be viewed as an illegality, with the result that a legislative measure supported by a majority of individuals voting against their party’s directive will be deemed invalid.

If a law is passed today, one party may advise voting against it. No, the member responds, it doesn’t matter if we lose our seats; we want to support this. They then cast their votes. Is that behavior forbidden? Or is it a perfectly legal activity that puts them at risk of being barred? said Salve.

If that is the case, what is the sanctity of the whips, the CJI questioned in response.

It exposes you to disqualification, Salve added. Your seat is forfeited. You return to the people… Because the disqualifying statute is written the way it is for a reason. It achieves a compromise between preserving party switching and House activity.

To further illustrate this, he stated, “Suppose a person is elected using unethical means. Everything he does is legal as long as his election is upheld. And that’s just as awful as defecting, if not worse… That is how our law is organized.

The anti-defection law, according to Salve, must always strike a balance between avoiding unwholesome defections and refraining from becoming an anti-dissent statute. The anti-defection bill has drawn criticism from Nani Palkhivala, who called it an anti-dissent statute. A party member has the right to declare that they will not follow the whip. And he could cast a no vote. Additionally, it’s possible that the party itself won’t act against its members in the future after realizing it had supported the wrong cause. This does not disqualify you. This law is understood in that way.

After being elected, can a member completely disregard their political party? If so, “it will be a risk to democracy,” the CJI questioned.

The Thackeray faction’s senior attorney, Kapil Sibal, stated that the BMC elections are approaching and that the dissidents will attempt to press for ECI orders while the court’s hearings are ongoing.

“In their appeal, they claimed that 12 out of the 19 Members of Parliament and 40 Shiv Sena MLAs in the Maharashtra Legislative Assembly backed them. They contend that they are the political party as a result. How will this petition stand if 40 MLAs are declared ineligible? They (ECI) are the ones who have relocated. The issue is that, he said.

Senior attorney A. M. Singhvi, who is also representing the Thackeray camp, stated that the rebels’ entire argument is predicated on the support of the vast majority of MLAs. He said, “But the claim stands if they are disqualified. Where does the balance of convenience lie? Why should it be made final and unchangeable?

Senior Advocate Arvind Datar, who appeared on behalf of the ECI, stated that the election body is constrained by the Representation of the People Act of 1951 and the Election Symbols (Reservation and Allotment) Order of 1968, whose regulation 15 states that the Election Commission is required to notify others, hear from everyone involved, and then make a determination if any group of political party members asserts that it is the actual political party.

“The political party that is on a political level is what the Election Commission is worried with. The events that take place in the Assembly are covered under the tenth schedule. Even if the judge finally rules that all of these members are in fact ineligible, the EC is unaffected by that decision. The primary political party is something that worries us, he remarked.

The CJI stated, “The concern is that you are making these petitions legally binding since the entire situation will collapse if you acknowledge the other group as the original political party.”

According to Datar, events in ECI may be unrelated to those in the Assembly. “I am a distinct constitutional entity. I have to fulfill my constitutional obligations. The Tenth Schedule cannot interfere with my responsibility, he continued, adding that the EC must present proof to determine who is in possession of the emblem.

However, the bench instructed Datar that although the EC might hear affidavits and other evidence, it should wait to act until the court decided whether or not to send the case to a Constitution Bench. Datar approved of it.