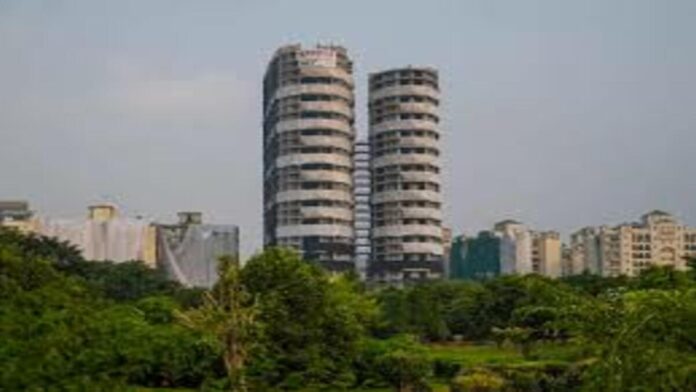 On Sunday, August 28, a project that was started in the middle of the 2000s in Noida to construct several luxury apartments in two buildings that would surpass the famous Qutb Minar in Delhi collapsed in nine seconds. A protracted legal dispute between homeowners and the developer of the two towers was finally resolved on Sunday afternoon with the demolition of the iconic Supertech Twin skyscrapers.

The Emerald Court housing development by Supertech, which was planned to include 15 towers with 11 stories each and two with 40 floors, was to be built off the freeway that connects Noida and Greater Noida.

A ten-year court struggle between the residents and Supertech was centred on these two towers. The Twin Towers being built where a garden was originally intended was the source of the locals’ resentment.

The intended 40 floors for the two towers were never reached. Apex had 32 floors and was one of the towers. 29 were on the other. Ceyane was 97 metres tall, whereas Apex was 103 metres. Court injunction prevented the construction of some storeys, while others had to be manually disassembled before demolition.

The Supreme Court’s decision to decide in favour of Emerald Court residents and order the Twin Towers’ destruction on August 31, 2021, cemented their demise.

The highest court also mandated that the developer provide buyers of apartments in the building a refund, plus interest.

The towers’ illegal construction was scheduled to be demolished on August 28 after a lengthy delay due to technical issues.

Then, days before the explosion, the Twin Towers were rigged with more than 3,500 lb of explosives. Nearly 7,000 holes in the building pillars were filled with explosives, and 20,000 circuits were installed.

The two towers were to be destroyed, and Edifice Engineering, a business in Mumbai, was given the job. On Sunday afternoon, the company in charge of demolishing the structures hit the button following a final inspection of the exclusion zone by law enforcement personnel.

At 2:30 pm, the explosives went off, the rubble started to fall like water, and the much anticipated spectacle was done in nine seconds.

Alok Kumar, the CP for Noida, claims that the exercise went off without a hitch and that professional teams are on the scene evaluating the blast. Following the demolition of Supertech, teams from Edifice, Jet Demolitions, Central Building Research Institute (CBRI), and Noida officials have started to analyse the structural integrity of nearby structures.

“Only specialists can assess the situation after demolition. We’re heading to the location to evaluate the leftover explosives and debris, if any are still there “explained he.

After the dust settled, the Noida Expressway was reopened, and by 6:30 pm, nearly 7,000 residents who were evacuated this morning from nearby communities could return. When they are permitted to return to their houses, they have been instructed to wear masks inside to protect themselves from the dust. By roughly 4 o’clock, the adjacent buildings’ power and gas supplies will be restored.

Ritu Maheshwari, CEO of Noida, was quoted by a news agency as saying, “Cleaning is being done, gas and electricity supplies will be restored in the region, and residents will be able to enter the neighbouring societies after 6.30 pm.”

Cleaning up the piles of trash that have accumulated at the demolition site is now the main priority. The concrete and metal fragments shattered after the implosion are being cleaned up by sanitation staff, smog guns, and mechanical sweeping devices deployed by Noida officials.

Earlier, the operation’s officials had estimated that 55,000 tonnes of debris would be produced. Debris removal could take up to three months. The trash will be disposed of at designated locations.