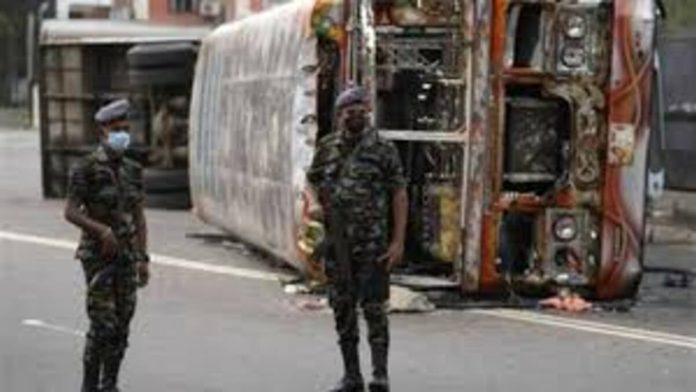 Sri Lankan authorities issued shoot-on-sight orders on Tuesday, a day after the island was rocked by deadly violence and rioting.

The defence ministry stated troops “have been ordered to shoot on sight anyone plundering public property or inflicting harm to life” with thousands of security forces enforcing the curfew.

Mobs replied by torching hundreds of residences of ruling-party politicians and attempting to attack the prime minister’s official residence in the capital late at night.

Eight people were killed, according to police.

Despite the curfew, protests continued on Tuesday, with some ignoring the shoot-on-sight order by torching buildings and cars.

On Tuesday evening, a luxurious hotel on the outskirts of the Sinharaja rainforest, alleged to belong to a Rajapaksa family, was set ablaze.

At two locations, police fired into the air to disperse rioters attempting to set fire to cars.

A crowd had already stormed and set fire to a van transporting Colombo’s top cop.

Officers fired warning shots and dispatched reinforcements to save Senior Deputy Inspector-General Deshabandu Tennakoon, who was brought to the hospital but released later.

On Monday, in addition to the 225 people killed, Prime Minister Mahinda Rajapaksa resigned.

His departure, however, did not appease the populace, as his brother remained president and wielded broad powers, including leadership of the security forces.

Chamal Polwattage, a protester, predicted that the crowds will grow again, vowing that they would not leave “until the president leaves.”

“The attacks against us yesterday have enraged the public… Many volunteers are bringing us food and water “AFP quoted him as saying.

Months of blackouts and shortages of critical products have weakened the Rajapaksa family’s grip on power amid Sri Lanka’s worst economic crisis since 1948.

The pandemic stymied critical tourism and led the government to cease most imports in order to save foreign currency for debt payments, on which it has already defaulted.

After weeks of peaceful protests, however, government supporters’ attacks on protestors on Monday marked a watershed moment.

Police used tear gas and water cannon to disperse demonstrators and imposed a curfew across the whole South Asian nation until Wednesday, which was later extended by another day to Thursday.

At least 42 homes of pro-Rajapaksa MPs were set on fire by enraged protesters.

Several Rajapaksa residences were set ablaze, as well as a family museum in their ancestral village.

When besieged by a swarm of demonstrators outside of Colombo, ruling-party lawmaker Amarakeerthi Athukorala fired two shots, killing one of them, police said.

Officers believe the MP committed suicide afterwards, while the ruling party claims he was killed. Also murdered was the lawmaker’s bodyguard.

According to authorities, another ruling-party politician in the south shot and killed two demonstrators while injuring five others.

Bachelet called for a probe in a statement and encouraged the administration to “engage in genuine discourse with all sectors of society.”

The US State Department also reaffirmed its call for a probe into the disturbances, stating that the growing violence and military deployment both disturbed Washington.

“We emphasise that peaceful protestors should never be treated to violence or intimidation,” spokesperson Ned Price told reporters.

Although Mahinda Rajapaksa stated that his resignation was intended to pave the door for a unity government, it was uncertain whether the opposition would join any administration formed by his brother.

The president has the authority to nominate and dismiss ministries, as well as judges, and is immune from punishment.

According to political insiders, efforts are being made to organise an online meeting between the president and representatives from all political parties.

“No one will be appeased,” Wilson Center expert Michael Kugelman told AFP.