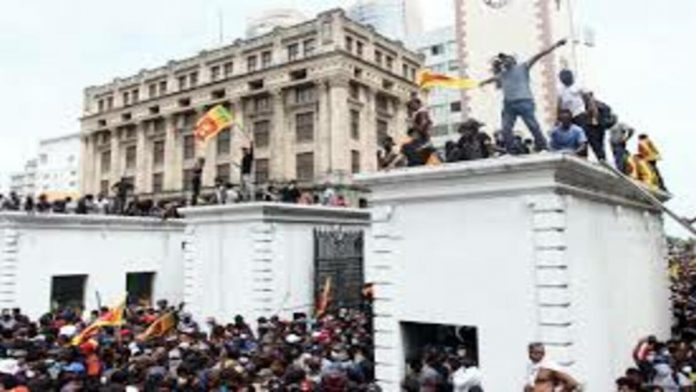 Thousands of protesters in Sri Lanka’s Colombo came out on streets amid the Country’s ongoing economic crisis – worst in past seven decades. Reaching out at the official residence of Prime Minister Ranil Wickremesinghe and President Gotabaya Rajapaksa, the protesters set fire to the private residence of the Prime Minister forcing him to flee and the President to resign.

Following this the Opposition parties decided to form an all-party interim government after the two leaders step down.

Moments ahead the protesters broke into the President’s compound, he fled his officials residence in the capital city Colombo. The protesters have been continuously demanding Mr Gotabaya’s resignation.

Amid the talks of Ranil Wickremesinghe’s resignation, questions on whether President Gotabaya will remain in office are doing rounds.

In Parliament the SJB has about 50 MPs and to win a vote in Parliament, they need to have a support of 113 MPs.

However, on Monday the city remained in calm despite hundreds of people strolled into President’s secretariat and residence and toured into the building. There was no interference by the police.

Meanwhile, the leaders of the protesting movement have clarified that they will keep on occupying the residences until the Prime Minister and President submit their resignation.

“We are not going anywhere till this president leaves and we have a government that is acceptable to the people,” a protester told media.

Speaker Mahinda Yapa Abeywardena on Monday said that the Sri Lanka Parliament will elect the new president on July 20.

“During the party leaders’ meeting held today it was agreed that this was essential to ensure a new all-party government is in place in accordance with the Constitution,” said the speaker in a statement.