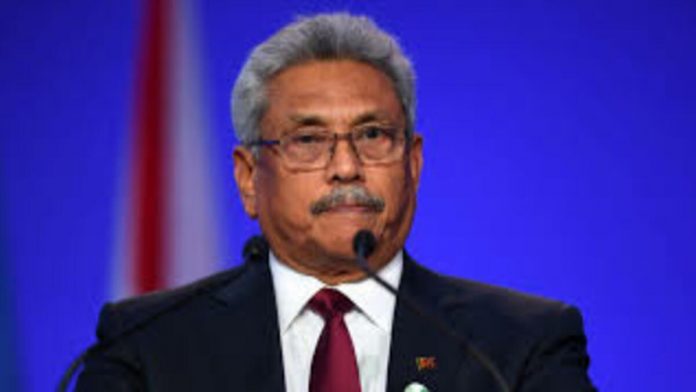 Disgraced President Gotabaya Rajapaksa travelled from the Maldives to Singapore a day after fleeing Sri Lanka, where the administration claimed he had been “given entry” on “a private visit.” He then sent a letter of resignation to the Speaker of the Lankan Parliament.

The Singapore Ministry of Foreign Affairs official confirmed Rajapaksa’s presence and stated, “He has not requested asylum and has not been granted any asylum.” In general, Singapore denies claims for asylum.

According to the Singapore police, “action will be taken against anyone participating in a public assembly that is illegal.” They also urged residents and visitors to “abide by our local laws.”

In a statement released by the office of Parliament Speaker Mahinda Yapa Abeywardena, it was confirmed that Gotabaya had submitted his resignation via email. The statement read: “The Speaker wishes to inform that an official statement on this would be made tomorrow (Friday) after the verification process and legal formalities.”

Anti-Gotabaya demonstrators on the ground in Colombo started leaving the government buildings they had taken over after storming the Capital on July 9. They had been calling for both his resignation and that of Prime Minister Ranil Wickremesinghe, who has taken office as Acting President.

Around six o’clock in the evening, protesters at the Prime Minister’s office on Flower Road filed out as security guards from the Sri Lankan Air Force and Army took back control of the structure.

However, they declared that they would continue to hold the Galle Face Green, the front portion of the former Parliament, and the Presidential Secretariat in order to carry on the “Aragalya” conflict.

The “GotaGoGama” demonstrators vowed to persist until their demands were satisfied.

Curfew was reinstated in Colombo about midday and lasted till Friday morning. Less people were present at protest locations, and the streets were calmer. Protesters claimed early on that this was also the case because it was a working day, as opposed to July 13, which was a public holiday.

The brothers of Gotabaya, ex-prime minister Mahinda Rajapaksa and ex-finance minister Basil Rajapaksa, reportedly told the Supreme Court that they won’t leave the country until a suit filed against them is heard on Friday, according to Lankan media.

There were hardly any protesters there when a news organization visited the PMO in the afternoon, shortly after they had made their intention to leave known.

The words “This is public property” were posted on signboards near the entrance and in other locations. We ought to defend it.

We don’t need to capture the building, said 28-year-old Sanka Jayasekere, a wealth plan manager for an insurance business by night. We’ve demonstrated that anyone can take control of the structure. It was an act of symbolism. We will leave it by this evening now that the point has been made.

Gehan Melroy, 30, a mechanical engineering graduate who was at the President’s residence the day before, declared, “We are not terrorists,” while donning a black T-shirt with a clinched fist insignia and the motto, “There is no victory without a war.” We want to demonstrate to the public that we are not here to trample on government property.

A red-carpeted circular staircase inside the building led to the first level, which houses the Prime Minister’s office. Everyone’s attention was drawn to the leather chair and the sizable desk with the two flags of Sri Lanka and the golden-plated flag.

The demonstrators alternated entering the air-conditioned area, sitting on the chair, taking pictures, and leaving — all under the careful gaze of three Sri Lankan military soldiers who were present in the space.

On the Prime Minister’s desk was a leaflet with the protesters’ demands, and someone had written, “Take notice… (expletive) and do appropriately,” on it. The Prime Minister, President, Cabinet members, and other top government officials must all quit, according to the demands.

There were 11 brown wooden chairs with beige upholstery and a brown wooden table with a glass top at the other end of the space. Before giving the property over to the government, one of the volunteers cleaned and arranged the chairs.

A white, nearly life-size statue of Buddha was located at the other end of the room, and Buddhist batik artwork decorated the walls.

One of the demonstrators, 25-year-old teacher Niluka Nadisan, was brewing coffee in the pantry. “We want these structures to be completely undamaged… However, we favor empowering the populace.

One could observe Sri Lankan security guards securing the building’s perimeter from the balcony on the first story, which looks out onto the gardens.