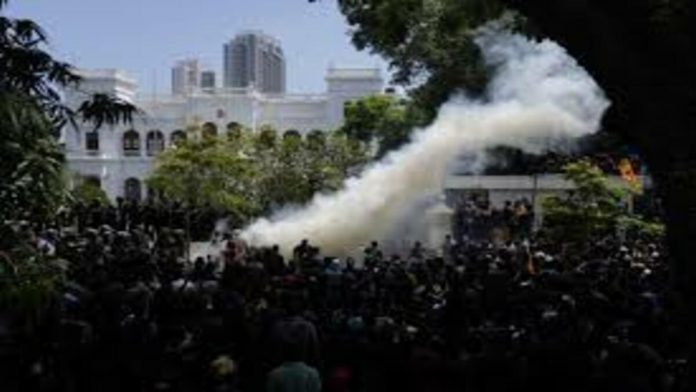 Following months of widespread protests against his island country’s worst-ever economic crisis, Sri Lanka’s beleaguered president left his country early on Wednesday and travelled to the Maldives. This move is likely a prelude to his resignation.

Gotabaya Rajapaksa left his official mansion in Colombo shortly before tens of thousands of demonstrators overran it over the weekend, promising to step down on Wednesday to allow for a “peaceful transition of power.”

Rajapaksa is thought to have intended to leave the country before resigning in order to avoid the risk of being arrested because he is immune from arrest in his capacity as president.

According to immigration sources who spoke to AFP, he, his wife, and a bodyguard were among the four passengers on board an Antonov-32 military plane that took off from Sri Lanka’s main international airport.

An airport official in Male reported that upon their arrival in the Maldives, they were escorted by police as they were driven to an undisclosed location.

An airport official in Male reported that upon their arrival in the Maldives, they were escorted by police as they were driven to an undisclosed location.

The workers at Bandaranaike International refused to provide VIP services and demanded that all passengers must go via public counters, preventing him from taking a commercial flight to Dubai.

According to a security official, the presidential party was hesitant to use the established channels out of concern for the public’s reaction. As a result, they missed four planes on Monday that would have allowed them to travel to the United Arab Emirates.

According to a security official, permission for a military flight to land in India, the group’s nearest neighbor, was not immediately obtained. On Tuesday, the gang briefly traveled to a naval base with the intention of escaping by sea.

Basil Rajapaksa, the younger brother of Rajapaksa and the one who left his position as finance minister in April, missed his own early-morning Tuesday Emirates flight to Dubai due to a violent standoff with airport personnel.

Basil, who is dual-national (Sri Lankan and American) tried to employ a paid concierge service for business travelers, but immigration and airport staff informed him that they had stopped offering the fast track service.

An airport representative told AFP that “several other passengers objected against Basil boarding their flight.” “He hastily departed the airport because it was a difficult scene.”

According to a diplomatic source, Basil had to get a new US passport after leaving his at the presidential palace as the Rajapaksas made a quick retreat on Saturday to avoid rioters.

According to official sources, a suitcase containing numerous documents was also abandoned inside the palatial estate together with 17.85 million rupees (about $50,000) in cash, which is currently in the care of a Colombo court.

He was still the commander-in-chief of the armed forces and had access to military resources, but the president’s administration had not made any official announcement concerning his whereabouts.

Rajapaksa is charged with mismanaging the economy to the extent that the nation lacks foreign currency to pay for even the most basic imports, causing extreme misery for the 22 million people living there.

In the event that he fulfills his vow to resign, Prime Minister Ranil Wickremesinghe will take over as president indefinitely until the parliament chooses a member of the legislature to complete his remaining term, which expires in November 2024.

However, Wickremesinghe has publicly stated that he would resign if a unity government could be formed.

The least amount of time required to call a session of parliament is three days, and the statute permits a maximum of 30 days for the succession process. The vote would occur on July 20 if Rajapaksa does resign on Wednesday, according to the house speaker.

Sajith Premadasa, the leader of the main opposition Samagi Jana Balawegaya party and Rajapaksa’s opponent in the 2019 presidential election, has declared he will run for the role.

Premadasa is the son of Ranasinghe Premadasa, a former president who was killed in a suicide bombing by a Tamil insurgent in May 1993.

Sri Lanka is in discussions with the IMF for a potential rescue after defaulting on its $51 billion in foreign debt in April.

The island’s already limited gasoline supplies are almost gone. To cut down on commuting and save gasoline, the government has mandated the shutdown of non-essential offices and schools.