Some Param Vir Chakra Awardees You Should Be Proud Of 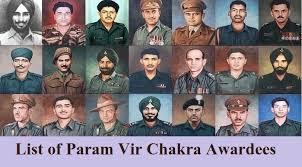 The highest military award in India that is the Param Vir Chakra (PVC) which is awarded to different acts of bravery at the wartime.

The Param Vir Chakra means the “Greatest of the Ultimate Brave” and is granted for “most conspicuous bravery in the presence of the enemy”.

Here are some of the awardees of Param Vir Chakar who won it for their brave acts and sacrifices for the country.

Major Somnath Sharma was the first person to receive the Param Vir Chakra Award. Major Sharma, with a broken arm, staved off the enemy attacking the Badgam aerodrome and Srinagar.

Naik Singh was commanding a forward post when the enemy attacked. We suffered heavy losses. Eventually, Singh somehow saved his troops but fell to the enemy bullets.

Rane braved machine gun fire, cleared mines and roadblocks as he laid a path for tanks. His diligence over days, despite being wounded, facilitated the advance on Rajouri. He drove to a roadblock in a tank, crouched under it, and cleared the mines.

During the Jammu & Kashmir operations in the summer of 1948 Major Singh single-handedly occupied an enemy post and moved to attack another when a grenade hit him. He still lobbed grenades and managed to destroy another bunker before succumbing to injuries.

Naik Singh fought in the Indo-Pakistani War of 1947 and was awarded the PVC for his role in saving a forward post at Richhmar Gali, south of Tithwal. He was also one of the five soldiers chosen to raise the Indian flag for the first time after independence in 1947.

Captain Salaria, was an Indian Army officer and member of a United Nations peacekeeping force. During Operation Unokat in 1961 Capt. Salaria and his Gorkhas charged a roadblock, killing 40 and knocking out two enemy cars. The rest fled. Salaria died of bullet wounds.

During  Sino-Indian War in 1962, Major Thapa’s post in Ladakh came under Chinese attack. He killed many in hand-to-hand combat before he was overpowered.

Singh joined the British Indian Army in 1936 and served in the 1st battalion of the Sikh Regiment. During the 1962 Sino-Indian War, he was commanding a platoon at the Bum La Pass in the North-East Frontier Agency. Subedar Singh faced repeated attacks by the Chinese. Despite a wound in the thigh, he refused evacuation. He manned a light machine gun and killed a large number of enemies.

Major Shaitan Singh Bhati took part in operations in the Naga Hills and also in the 1961 Indian annexation of Goa. During the 1962 Sino-Indian War, Major Singh’s men came under heavy Chinese attack. Hurt, he ordered his men to leave him there. They placed him behind a boulder where he succumbed to his injuries.

Company Quarter Master Havildar Abdul Hamid moved out with his anti-tank recoilless rifle mounted on a jeep when Pak forces attacked the Khem Karan sector during the Indo-Pakistani War of 1965.

Lt. Col. Tarapore was at the helm of the tank battle of the 1965 Indo-Pak war. Tarapore led the regiment in several tank battles between September 11 to September 16, and was killed in one such battle at Butur-Dograndi on 16 September.

Lance Naik Albert Ekka was killed in action in the Battle of Hilli, during the Indo-Pakistan War of 1971.

During the 1971 operations, Sekhon was with No. 18 “Flying Bullets” Squadron flying the Folland Gnat fighter based at Srinagar. He and his colleagues fought successive waves of intruding Pakistani aircraft with valour and determination. On the 14th of December 1971, Srinagar Airfield was attacked by a wave of six enemy Sabre aircraft. Sekhon took off and immediately engaged a pair of the attacking Sabres. He succeeded in damaging two of the enemy aircraft.

During the 1971 Indo-Pak War, the 47 Infantry Brigade, with the 17 Poona Horse under command, was ordered to establish a bridge-head across the Basantar River in the Shakargarh sector. Khetarpal fiercely attacked the enemy strong points and captured many enemy soldiers and recoilless guns at gunpoint. He destroyed several enemy tanks.

During the 1971 Indo-Pak war, though wounded seriously in enemy shelling, Major Singh again went alone from trench to trench, moving in the open. Major Singh, realising the importance of fire support at this juncture, rushed to the machine gun pit and operated the gun inflicting heavy casualties on the enemy.