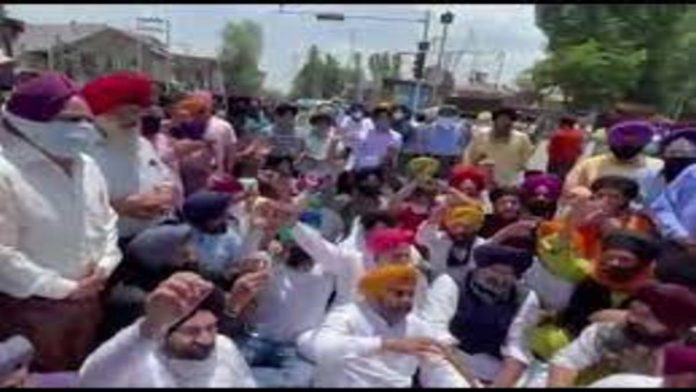 On the reports of purported ‘kidnapping and forcible conversion’ of two Sikh girls in Jammu and Kashmir, Akal Takht Sahib on Sunday requested an anti-conversion law in the UT, like the ones carried out in Uttar Pradesh (UP) and Madhya Pradesh (MP).

The ‘Nikah’ (marriage) of the Sikh girl (18), who her parents said is specially-abled, was purportedly done with an individual of over 60 years-old, in Rainawari area of Srinagar. The young girl was supposedly kidnapped from Rainawari by an elderly person, who was already married and has children, and she was found in Chandoosa town in north Kashmir.

The family of the girl said that she disappeared on Monday and the J&K police had guaranteed that the girl will be returned within 36 hours.

The family also said the girl was kidnapped at gunpoint and that they came to realize that she will be produced in the Court on Saturday morning.

On Saturday, the girl was brought to the Srinagar High court alongside the group of the elderly man. The family of the girl was informed that she has been married to the 62-years old man. The shocking disclosure sent shudders among the Sikh Sangat. The Police told the girl’s brother that she will be given over to the family before the day’s over.

By Saturday evening, the Court proclaimed the ‘marriage’ substantial and gave over the authority of girl to the old man’s family. The girl’s parents alleged that they were not permitted to go into the court and their voice has not been heard.

According to sources, the other girl is from Mehjoor Nagar of Srinagar, went to a function of her Muslim friend, and was subsequently discovered married to a boy who also attended the same function. The girl is still missing, the sources said.

The Sikh community in Srinagar on Saturday protested in solidarity outside the Judicial Court Complex Srinagar requesting the custody of the young lady, and the parents were permitted to meet the girl nearly at 10.30 pm.

Many videos went viral of the protest over social media and some Sikh leaders from Kashmir announced matter to the Sikh bodies including Shiromani Gurdwara Parbandhak Committee (SGPC) and Delhi Sikh Gurdwara Management Committee (DSGMC) on Saturday night.

On Sunday morning, DSGMC president Manjinder Singh Sirsa led a Sikh delegation to Kashmir to learn the ground circumstance and held a gatherng with the Sikh people group in Kashmir at Gurdwara Shaheed Bunga Sahib in Bhagat, Burzulla, Srinagar.

President of DSGMC MS Sirsa had addressed the gathering of nearly 200 Sikhs and later, led a protest through the streets of Srinagar, requesting action against the individuals who purportedly married the girl to the old man.

“I am at Srinagar joining the protest with local Sikh community against forced Nikah and conversions of Sikh daughters who are forced to marry elderly of different religion. I urge Government of India to take stern action against such kind of Nikah happening in the valley”, Sirsa tweeted.

“I request local leaders of Srinagar and Mullanas & Muftis to come in support of Sikh daughters. Sikhs were at the forefront ensuring Muslim daughters reach home safely during CAA protests but no Muslim leader has come to raise voice against forced conversions of Sikh girls”, he again tweeted.

“The local politicians in J&K should speak up against such practices and take action against such Qazis who are reading out the Nikah of young girls with the elderly men and such people should be socially boycotted”, said the DSGMC president.

Requesting an anti-conversion law he said, “The local Sikh community of Jammu and Kashmir urges @AmitShah Ji to get a strong law implemented in Jammu & Kashmir (Just like Uttar Pradesh & Madhya Pradesh) mandating Permission of parents in inter-religion marriages to stop these forced Nikahs of Sikh minority girls.”