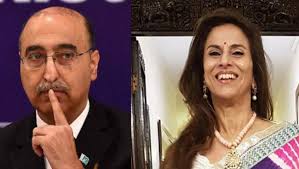 While Pakistani establishment struggles to soothe out the internal uproar after India’s move to abrogate Article 370 and bifurcate the Indian state of Jammu and Kashmir, help for the rogue nation is coming out from various pseudo-liberal media outfits based in India. Several media outfits have been coming out skewed and controversial reports on sensitive issues which are then being used by the Pakistani deep state to further radicalize its population against India.

Now a new video has surfaced which shows the former Pakistani High Commissioner to India Abdul Basit, in which he has made shocking revelations around how Pakistani establishment had approached Indian journalists to put out reports which were ultimately aimed to favour Pakistan against India.

In the video Abdul Basit, allegedly names journalist Shobhaa De and outlines Pakistan approach towards Indian journalist, he says “One of the challenges we had faced was how to find a journalist who can be convinced to write a good article on behalf of us, advocating a plebiscite in Kashmir. Then we found a lady, Shobhaa De …”

These shocking revelations are sure to rock Indian journalistic corridors, where many journalists have already been facing flak over skewed and lopsided reporting on several sensitive issues including the problem in Kashmir.

However, these comments are sure to have a more overarching impact than just internal uproar in India, as this is an unprecedented incident where an ex-official of the Pakistani establishment had come out openly and laid out Pakistan’s nefarious designs to subvert Indian media. Earlier however several Indian journalists have been praised by so-called ‘non-state actors’. In 2016 international terrorist and Jamaat-ud-Dawa (JuD) chief Hafiz Saeed had praised Indian journalist Barkha Dutt and praised her work. This is the first an ex-Pakistani bureaucrat has named an Indian journalist in this context.

Moreover, it is highly unlikely that only one or a few Indian and international journalists were approached by the Pakistani establishment, which ultimately translates to a deep network of journalists in India who have worked on Pakistani motivation possibly even on a payroll to present a Pakistani favourable view in the Indian media regarding Kashmir.

However these developments are sure to be used by the Pakistani establishment to further ‘motivate’ these said journalists to continue with their pro-Pakistan reporting; in order to avoid exposition by Pakistani establishment which would not only invite firm legal action by the Indian state but also strip these journalist of credibility, or at least whatever is left of it. Pakistan naming a single journalist is seemingly a warning shot for possibly a significant number of Indian journalists to accelerate their skewed reporting, who have alleged nefarious links with the rouge nation. Nonetheless, the fact remains that several media outlets in the past have been called out for their highly divisive and objectively poor reports on several issues, with most of the reports and opinion pieces mostly amounting to just blatant fear-mongering and clear disconnect with ground realities. Looking at the trend and these recent comments by Abdul Basit it is not surprising that enemies of the nation have been conveniently picking up these reports to justify and propagate their anti-India agenda.