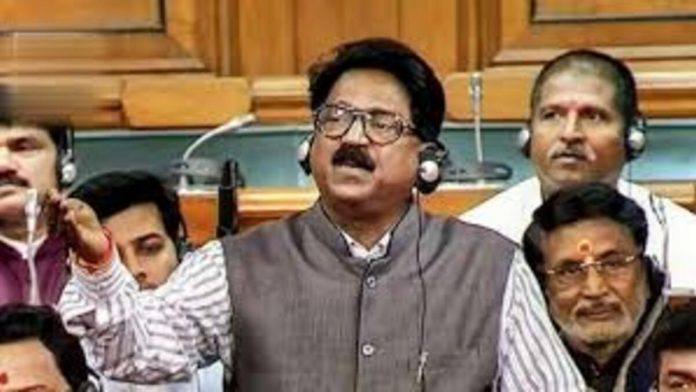 Arvind Sawant of the Shiv Sena downplayed the selection of a new Chief Whip in the Lok Sabha, which was mainly seen as a preventative move to avoid a repetition of the divide that occurred in the assembly. The previous whip, Bhawna Gawli, he claimed, was worried of getting picked up by the Enforcement Directorate.

She mentioned enlisting with the BJP. She wasn’t going to any meetings. Therefore, we needed someone, Mr. Sawant said in an exclusive interview when questioned about Ranjan Vichare’s appointment as the new Whip.

When questioned about the possibility of MPs switching sides, he responded, “You know his (Eknath Shinde’s) son is an MP. Will he stay with Uddhav Thackeray ji or join his father? Udhav Thackeray ji is familiar with some people. We do. We’ll take on this challenge.

The entire state of Maharashtra wept the day Uddhavji moved out of Varsha, the Chief Minister’s official residence. Shiv Sena’s strength is that. They support Uddhav Ji, Balasehab Thackeray, the party’s founder, and the Shiv Sena. They have no allegiance to any faction, Mr. Sawant reiterated to NDTV, adding that the Shiv Sena was not the cause of the current issue but rather a divide within the legislative party.

However, what he described as the schism in the parliamentary party has deepened, with 66 former Thane council members today announcing their support for Eknath Shinde. Brihanmumbai Corporation is the next civic organisation in Mumbai.

The Shiv Sena controls Thane, the largest and most prestigious civic authority in Maharashtra. However, it is also where Eknath Shinde, the new chief minister, has his backyard.

Mr. Sawant lashed out at the BJP and the faction led by the new Chief Minister, accusing them of staging a split in the legislative party and forming a government independent of the BJP in order to “mock the constitution.”

“Please review the laws’ specifics. There is a crisis with the constitution. They have broken every legal requirement, he claimed in an exclusive interview with NDTV.

Defectors are barred from membership in legislative bodies under the Tenth Schedule of the Constitution, but there are several exceptions stated in its Paragraph 4: “Disqualification on grounds of defection not to apply in event of merger. (1) A member of the House shall not be disqualified in the event that his political party of origin merges with another party and he asserts that he and any other party members: (a) have joined the other political party or, as applicable, the new political party created by the merger; or (b) have refused to join the merger and chosen to continue operating as a separate group.

“(2)… The merger of an individual member of a House’s original political party shall be deemed to have occurred if, and only if, not less than two-thirds of the members of the legislature party concerned have agreed to such merger.”

According to a common interpretation of subsection (2), MPs from one party would not be disqualified if two-thirds of them joined another party after defection. The High Court of Goa has upheld this.

However, detractors claim that the entire fourth paragraph has been poorly written and contains openings for horse trading, which is precisely what the rule was designed to prevent.

The Team Thackeray has filed a petition with the Supreme Court alleging they have broken the Anti-Defection legislation in light of Eknath Shinde’s alliance with the BJP to create a new government without a merger.

The subject will be heard by the court again on July 11.