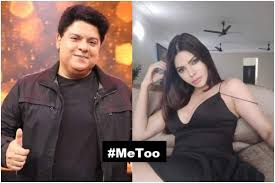 Bollywood actress Sherlyn Chopra is an avid social media user and time and again she hits up controversies with her comments and ventures but also enjoys a huge fan following worldwide. Taking to her Twitter handle, the actress has accused filmmaker Sajid Khan of sexual harassment, leaving the entire film fraternity and fans shocked. In a tweet, the actress recalled her meeting with the ace filmmaker in the year 2005, post the demise of her father. Her tweet reads, ‘When I had met him in April 2005, a few days after my father’s demise, he had taken his private part out of his pants and had asked me to feel it. I remember having told him that I know how it feels like & that the purpose of my meeting with him was not to feel or rate it…’ Earlier, the late actress Jiah Khan’s sister Karishma also came forward and accused Sajid Khan of sexual harassment. In a documentary, Karishma said that it was a rehearsal for the film ‘Housefull’ when Jiah was reading the scripts and Sajid asked her to take off her top. Actress Kangna Ranaut also took to her Instagram and reacted to the allegation made by Jiah Khan’s sister Karishma and tweeted, ‘They killed Jiah they killed Sushant and they tried to kill me, but they roam free have full support of the mafia, growing stronger and successful every year. Know the world is not ideal you are either the prey or the predator. No one will save you you have to save yourself.’ Notably, Sajid Khan’s name has also emerged during the #MeToo movement in the year 2018. The ‘Housefull’ franchise director was accused by model and actor Saloni Chopra of sexual harassment and abuse. In the heart-wrenching account, the model-actor took to her Twitter handle and recalled how, in 2011, Sajid Khan, under whom she was working as an assistant, allegedly emotionally abused her, sexually harassed her, and undermined her acting abilities. Post these serious allegations, Sajid Khan had to step down as director of ‘Housefull 4’, which was released last year.