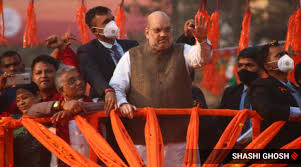 Addressing a rally on Thursday Union Home Minister Amit Shah alleged Trinamool of following the rule of “cut-money” in the state of West Bengal and said if people vote BJP in the upcoming Bengal assembly polls then it will end the rule of “cut-money” and bring development in the state. He also said that BJP’s ‘Parivartan Yatra’ aims at transforming the state and ending the infiltration, not on changing the Chief Ministers or MLAs.

“This ‘Parivartan Yatra’ is not for changing a CM, or a minister. It is for ending infiltration and also for the transformation of Bengal. You vote for the BJP. Leave alone illegal immigrants, not even a bird from across the border will be allowed to enter the state,” said Shah at the rally.

He also highlighted the BJP workers who were killed and said the killers will be soon seen behind the bars.

The Home Minister also said that the BJP is all set to expose the goons and syndicates owned by the TMC. Shah also alleged Mamata Banerjee by saying, “Bengal CM gets angry at the slogan due to her appeasement politics,” he said this by citing an example of when Banerjee denied to speak at an event to celebrate Netaji Subhas Chandra Bose’s birth anniversary where the slogans of “Jai Shri Ram” were raised.

The Union Minister also alleged TMC of corruption while disbursing relief funds during cyclone ‘Amphan’, “The central government had sent relief funds after ‘Amphan’ cyclone, the money was siphoned off by the TMC leaders. If voted to power, we will probe into this corruption. We will form a task force for saving lives from cyclones and environmental disasters,” said Shah.

Amid the slogans of “Jai Shri Ram” on Thursay, Shah held a roadshow in South 24 Parganas district at Kakdwip of West Bengal where upcoming assembly elections will be held in the months of April-May this year.

The Union Minister with the state BJP chief Dilip Ghosh at the decorated lorry, waving hands to the crowd gathered at the roadshow and the chants of “Jai Shri Ram,” “Narendra Modi Zindabad,” and “Amit Shah Zindabad” were being shouted by the crowd . The show was seen from the rooftops as well and the show was being videographed.