Senior Commanders Of Indo-China Armies To Hold A Meeting Today

The indo-China Skirmish started when India accused China for intruding in the Indian territory, but China denied the accusation. And the rounds of talks are taking place since June 6, 2020. 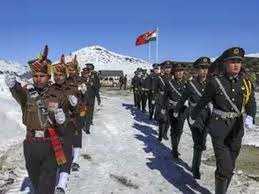 Today India and China will have their 19th round of talk to move forward the disengagement from the Ladakh and Pangong regions. In the meeting the senior commanders of both the armies will talk to end the stand-off peacefully. This comes after when both the countries have completed the withdrawal of troops and removal of their camps.

However, this withdrawal of troops has finally took place on February 10, after a few rounds of talks. As per the sources the place of the meeting is scheduled to be at Moldo border point on the Chinese side of Line of Actual Control (LAC) in eastern Ladakh.

The indo-China Skirmish started when India accused China for intruding in the Indian territory, but China denied the accusation. And the rounds of talks are taking place since June 6, 2020.

The battle heated when the physical clash between India and China took place on June 15, 2020 at Galwan Valley in Ladakh. In the clash total 20 Indian soldiers were killed but China did not revealed its casualties till yesterday.

China has finally admitted its Four casualties around 9 months after the clash.

On February 11, the Defence Minister Rajnath Singh announced in Parliament that China will pull back its troops to the east of Finger 8 areas in the northern ban of Pangong lake, whereas the Indian troops will be deployed permanently at Dhan Singh Thapa Post near Finger 3 in the region. Similar action will be taken at the south bank of the lake as well, said Rajnath Singh.

It was also said by the Defence Minister in the Parliament that, once the disengagement is completed, it is planned to hold a meeting of the senior commanders of both the sides with the 48 hours of disengagement.