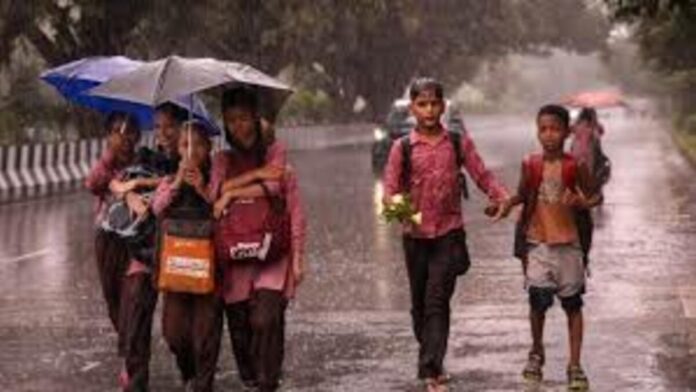 On Thursday, the national capital was hit by torrential rains for the second day in a row, which caused serious waterlogging in certain places and disrupted traffic flow on major highways throughout the city. In addition, the India Meteorological Department (IMD) issued a “yellow alert” warning of moderate rain expected in most areas of the city on Friday.

The nation’s capital is also set to experience rain throughout the weekend. Private schools (up to class 8) in Noida and Gurugram have been instructed to stay closed on Friday due to the severe rainfall.

Long traffic jams have been reported in the Delhi-NCR area, and additional rain is expected. A typically cloudy sky, moderate rain, and thundershowers are what the weather office has predicted for most locations. According to the MeT, the high and low temperatures are predicted to be 28 degrees Celsius and 23 degrees Celsius, respectively.

The meteorological service said that during the next three to four hours, “a fresh cloud is heading towards Delhi leading to potential of light to moderate rainfall at most places with severe spells occasionally at a few places over Delhi and neighbouring portions of NCR.”

After Friday’s nonstop rain, severe waterlogging was seen in various areas of Gurugram.

On Thursday, waterlogging and traffic congestion were caused by heavy rain in numerous areas of Delhi and the NCR. On various sections of National Highway (NH) 48, particularly at Iffco Chowk, Shankar Chowk, Rajiv Chowk, and at Sarhaul close to the Gurgaon-Delhi boundary, traffic congestion was recorded.

An official order issued on Thursday stated that all public and private schools up to eighth grade in Noida and Greater Noida’s Gautam Buddh Nagar will be closed on Friday due to rain.

According to District School Inspector Dharamveer Singh, the District Magistrate Suhas L Yathraj issued the order to close the schools after the weather department issued a warning owing to rains in the area.

According to a formal statement released on Thursday night, Singh stated that all classes 1 through 8 in the district would be cancelled on September 23.

In contrast, due to the significant rainfall, all private educational institutions in Gurugram have been ordered to declare Friday a vacation. On Friday amid heavy rain, the Gurugram administration has directed all corporate offices to operate from home. It is also recommended that all private educational institutions close their colleges and schools.

All corporate offices and private institutions are encouraged to encourage staff to work from home so that traffic congestion can be minimized, according to a warning from the District Disaster Management Authority.

There is a danger of waterlogging and traffic congestion on September 23 due to the district of Gurugram receiving significant rainfall. So that traffic congestion may be avoided and road and drain repair projects by civic agencies can go without hiccup, it is urged that all corporate offices and private institutions in the district encourage their workers to work from home on Friday.