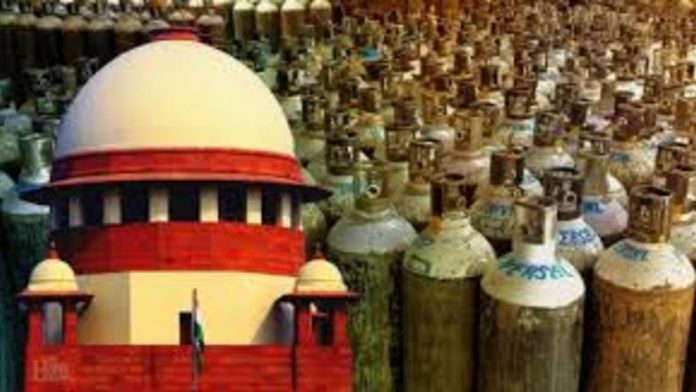 The Supreme Court on Thursday strictly told the Centre that at 700 tonnes of oxygen must be supplied to Delhi everyday as asked by the national capital to treat the Covid-19 patients.

Delhi Chief Minister has alleged that the city is getting half of its daily requirement and the BJP-ruled states like Uttar Pradesh are being priortised.

The city has a daily requirement of 700 tonnes of medical oxygen due to high rising Covid-19 cases and the hospitals are continuously sending SOS for medical oxygen in every couple of hours.

“You will have to give 700 tonnes to Delhi (700 tonnes dena hi padega),” said the top court in its statement.

“If nothing is to be hidden, let it come before the nation how allocation and distribution is done transparently by the centre,” said the Supreme Court. “The centre continues to be in contempt for not supplying 700 tonnes of oxygen to Delhi,” the court said.

Defending itself the Centre said that Mr Kejriwal is using the top institution to speak against the Centre. “There has to be an audit because there is systemic failure, but it is not against political leadership or officers. The centre was given mandate twice by the people of this country, and we are very much concerned. We cannot be Delhi centric,” said the Solicitor General Tushar Mehta for the Centre.

The Centre also said that the shortage of oxygen in the national capital is its own doing. “The problem in Delhi is not because of less supply but serious systemic failure in distribution,” said the Centre.

The CM assured that the city’s administration will not “let anyone die” if they are supplied their daily requirement of 700 tonnes of oxygen.

“If we get an adequate supply of oxygen – 700 tonnes – we will be able to set up 9,000-9,500 beds in Delhi. We will be able to create oxygen beds. I assure you that we will not let anyone die to a shortage of oxygen in Delhi,” said Kejriwal in a news briefing.

With more and more people dying due to shortage of oxygen and a sharp increase in new cases everyday is what is making the second wave a deadlier one. People on social media are posting their medical requirements from oxygen to beds, medicines and even food. The social media are full of such posts.