Sasikala returned to Tamil Nadu After Completing Her Sentence, The State Turned Into Festive Atmosphere

Before coming to Tamil Nadu she left a resort in Bengaluru with her nephew and general secretary of Amma Makkal Munnetra Kazhagam TTV Dhinakaran in a convoy of 200 vehicles. 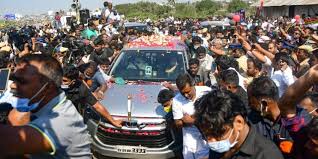 AIADMK leader VK Sasikala after her expulsion returned to Tamil Nadu on Monday to a grand reception. She completed her imprisonment term in Bengaluru for four years in a case of disproportionate assets case of Rs.66.65.

She was a close aide to J Jayalalithaa. Her supporters broke out in celebration around 10 am when she entered at Tamil Nadu at Athipalli in Krishnagiri district in Karnataka. The supporters were showering flower petals on her convoy and were also dancing on drum beats.

Before coming to Tamil Nadu she left a resort in Bengaluru with her nephew and general secretary of Amma Makkal Munnetra Kazhagam TTV Dhinakaran in a convoy of 200 vehicles. Her return is being closely watched as the state of Tamil Nadu is going to have its elections in near months.

Before leaving she paid floral tributes to J Jayalalithaa wearing a green saree which was the favourite color of Jayalalithaa, she was travelling from a car which was displaying an AIADMK flag over its bonnet despite the warning of AIADMK against its usage by the non-members of the party.

She is mainly addressed as ‘Chinnamma’ by her followers. A large gathering greeted her by waving both the flags of AIADMK and AMMK at Athipalli border.

The border districts of the states were gripped with a festive atmosphere because of the celebration with flex boards, banners, hoardings and posters welcoming Sasikala. Women at the roadsides were holding Kalasha decorated with flowers to welcome the leader.

Chinamma was imprisoned in Parapana Agrahara central prison since February, 2017. She was released on January 27, but remained in Government Victoria Hospital as she tested positive in her judicial custody. She got discharged on January 31 from the hospital and then she stayed at a resort with her nephew which was around 35 km far from Bengaluru.

She was not the only one sentenced in the case, there were others also who went with her for the jail term. Those who underwent include Jayalalithaa’s disowned son VN Sudhakaran along with Sasikala’s sister-in-law J Ilavaras.

The assets case was originally filed against Jayalalithaa and the three others for amassment of Rs 66.65 crore assets disproportionate to their known sources of income between 1991 and 1996.

However, the case was later transferred to Bengaluru where all the four were convicted.